Just One of the Gays: 10 Things I Love About “Love, Simon” 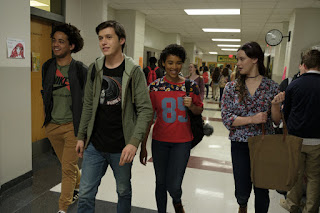 The equally sweet and cheesy “Love, Simon” is not only influenced by 80s and 90s teen films but it’s actually three great films in one. One is a story about a teenager struggling with coming out of the closet. One is a romantic comedy about blossoming teen love that feels universal. And one is actually a pretty fun mystery. Here are ten things I don’t hate about “Love, Simon.”

A coming of age story from a new perspective. “Love Simon” follows a teenager named Simon who seemingly has the perfect life (read: huge house, car, hot parents) But life isn’t always as perfect as it appears on the surface. Simon happens to struggle with a big secret. He’s gay and hasn’t told anyone. He begins a penpal-like relationship with a fellow student named “Blue” who comes out anonymously on their school’s blog site and Simon becomes obsessed with figuring out who this mystery guy is as he begins to fall for him.

A strong message about inclusion and representation in a mainstream Hollywood film. Sure there are small films like Brokeback Mountain and recent Oscar winner Call Me By Your Name that sometime breakout into the mainstream but they often are serious dramas with stories that end in either tragedy or heart break. “Love, Simon” thankfully has no such ending. The film isn’t political whatsoever; there’s no agenda, that’s not the point.

The directing. The film is directed by Greg Berlanti. It’s a name few probably know but many will be familiar with. He’s responsible for the DC-universe on TV’s The CW. Yeah, he developed “Arrow” and “The Flash” and got his start writing for “Dawson’s Creek.” Berlanti’s film is bright and colorful and even if there’s nothing too flashy in how the film itself looks, he offers plenty of fun touches including a mid-film fantasy musical number that had be beaming from ear to ear. Sure “Love Simon” is a little sappy and cheesy at times, but what do you expect from the writers of “This is Us.”

The writing. That’s right, the film was written by Elizabeth Berger and Isaac Aptaker who work on the delightfully soapy hit NBC drama. This is easily the type of film that could have wound up as a made-for-tv event but the fact that it got green-lit for the big screen is almost miraculous. The script is witty and offers up a fun mystery in regards to Simon’s quest to figure out who “Blue” is. The screenwriters obviously had a strong foundation as the often comedic film is based on Becky Albertalli’s award winning young adult novel “Simon vs. the Homo Sapiens Agenda.”

Moviedom’s nicest, coolest, and most understanding parents. Jennifer Garner and Josh Duhamel play power couple/Simon’s parents and even if they’re not necessarily given all that much to do they each have their moment to truly shine. After Simon’s coming out each parent has a really sweet moment with their teenage son. Bring tissues.

The best friends. Thankfully the casting directors were able to find actors who actually looked, sounded, and acted like teenagers. Robinson is 22 sure but he looks young. Simon’s friends are all likable, appealing young actors and you feel like you’re watching real people. Of course the film isn’t afraid to have these people do unlikable things that have important effects on the plot which keeps things interesting.

A fun soundtrack. Besides the film’s subplot involving a school production of “Cabaret,” the film is loaded with great (mostly modern) tunes, most of which come from the band “Bleachers.” The songs are fun and recognizable and the movie even throws in a few classics into the mix. Which means Rob Simonsen’s fantastic, electronic score fits perfectly with the 80s teen movie aesthetic the filmmakers were going for. Which brings me to…

Nostalgia. Nostalgia. Nostalgia. Teen movies were a big deal back in the day thanks to John Hughes and all the other filmmakers inspired by him. All of those films are great, but you’d never see a gay character portrayed in such a non-stereotypical/offensive way let alone in a story from their perspective. The film really feels more like the teen movie genre’s 90s counterpart that featured everything from “Clueless” to “Ten Things I Hate About You” and “Never Been Kissed” all the way up to the more recent “Easy A.” This one just so happens to be about a lead male character who isn’t into girls. Which is why anyone who was either a) ever a teenager or b) ever enjoyed movies about teenagers should find “Love, Simon” rather enjoyable.

Teen movie cliches. Yes they exist. I’m talking about the goofy comic relief vice-principle (Tony Hale) who tries too hard to relate to his students (Natasha Rothwell). The pissed-off teacher who tells it like it is. And most ridiculous of all, the sheer amount of time that students in these movies have in the morning before class. Simon is able blow off breakfast with his already awake and showered family, pick up three of his friends, stop for iced coffee, find a parking space right in front of the building, and get to class on time. Right.


If those aren’t good enough reasons to see “Love, Simon” I don’t know what are. GRADE: A-