Maul in the Family: “The Strangers: Prey at Night” Offers Some Nostalgic Slasher Fun But Not Much Else 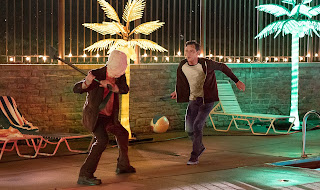 Wow these guys REALLY want to find Tamara huh? “The Strangers: Prey at Night” conjures mixed feelings. The horror nerd inside me wants to declare it a slasher-tastic, raucous good time. While the snobby film critic in me wants to complain about the many reasons why it’s a pretty terrible film. It is a pretty terrible film. But you know what? It’s sort of fun… It’s “fun” in a way that the superior original is not. The 2008 film “The Strangers” was nihilistic, depressing, but utterly terrifying. The film brimmed with suspense and tension. It was like “Halloween” turned up to an eleven. “Halloween” never offered much hope, but at least the main protagonist survived. There’s no such reassurance in “The Strangers.” The film’s long delayed sequel “The Strangers: Prey at Night” is way less cynical and is even arguably amusing in a way the original just wasn’t; but it really lacks the unbearable tension that made the first film so powerful. The 2008 film functions as a gritty 70s torture drama with no real hope or catharsis; while the belated sequel finds pleasure in an 80s chase and slash aesthetic in which the audience is practically encouraged to groan, shout, and cheer at the appropriate moments. At least the enthusiastic audience members did when I saw it.

Let’s get the negatives out of the way so we can get to the good stuff. The acting. No one is winning an Oscar for a slasher film let’s be honest. The performances don’t need to be transcendent; they just need to be passable. Are they passable here? Barely. Christina Hendricks (“Mad Men”) and Martin Henderson (“The Ring”) are the parents of the troubled Kinsey (Bailee Madison) who’s being sent away to boarding school. You can tell she’s rebellious because she wears a Ramones shirt and smokes cigarettes; I didn’t buy it. Then there’s her jock-geek older brother Luke (Lewis Pullman). Madison feels like she was plucked from the Disney Channel casting pool and it shows; she doesn’t quite have the chops to pull off Final Girl duties. That’s a bummer. Pullman is likable. It’s probably because he’s Bill Pullman’s son. Hendricks and Henderson are serviceable as the disposable parents but they’re frankly not given much to do. They’re all we have to root for which is kind of sad really. Then there’s the three masked maniacs who spend a late night stalking and killing off this dysfunctional family as the clan settles into an off-season mobile home park.

There’s no plot. Here’s a family. Here are the killers. The killers want to murder the family. That’s pretty much all we’re given. And that’s fine because we know this ain’t Shakespeare. It works in the original film because what the film lacked in plot or character development was made up with tremendous suspense and dread. It was quite effective. There’s not quite as much tension here but you can tell director Johannes Roberts (who also made last year’s disappointing shark flick “47 Meters Down”) is trying to accomplish. There is certainly a strong sense of mood and 70s/80s nostalgia flowing through the film’s brief 85 minute runtime. The film is loaded with wide shots and zooms with the killers creepily lingering in the corners of the frame. Nods to everything from John Carpenter, Steven King, and even a bit of Texas Chain Saw Massacre are nice. The film has a fun retro soundtrack featuring a fun electronic score from Adrian Johnston. Roberts obviously had a vision; from the retro title card to the 80s pop tunes blaring on the soundtrack (he initially wanted to score the entire film with 80s songs) and the fun camerawork. The film however looks and feels somewhat cheap, as if it was all rushed into production.

For those of us awaiting the return of the three masked strangers there’s very little connective tissue from this film to its 2008 counterpart. The first film was a disturbing home invasion thriller; this second entry expands it slightly and feels more like a traditional chase and slasher flick. The fun retro-vibe is really appealing though I don’t know if the film works as well as the filmmakers think it does. To be honest, I’m torn. The film is somewhat shoddy and the characters are pretty bland and the actors don’t help much and the Final Girl is completely unworthy. But there are so many fun moments in the ridiculous third act that annoyed the critic in me but delighted the horror nerd in me. It’s certainly a must-see for those horror fanatics who have been waiting an entire decade for the triumphant return of Dollface, Pin-Up Girl, and the Man in the Mask. It’s not the sequel I was necessarily expecting but that’s not always such a bad thing.  GRADE: B-

This blog is fully fabulous in all aspects. Payroll Solution

Congrats you individuals are doing with this blog site.

Thanks for sharing such a great informative post it really helpful.

Hello! Would you mind if I share your blog with my zynga group?
There’s a lot of folks that I think would really appreciate your
content. Please let me know. Cheers

Your style is unique in comparison to other people I've read stuff from. Thanks for posting when you've got the opportunity, Guess I'll just book mark this site.

Very good info. Lucky me I discovered your website by accident (stumbleupon). I have book marked it for later!
https://rokucomlinks.org/espn-com-activate/