Good Grief: “Wake” is a Smart and Observant Dramedy 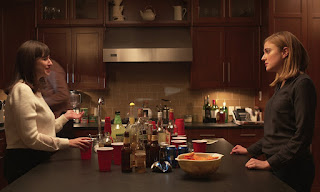 Is there anything more awkward in life than death? Probably not. In the short film “Wake” death sets the scene as a young woman returns to her hometown for the funeral of her estranged best friend. Taking a cue from observant films about death in the presence of life such as “Garden State” and “The Big Chill” the film finds itself dealing with grief in a really keen way. A short film doesn’t always give filmmakers much time for truly in-depth character development but “Wake” makes great use of its 25 minutes. Even for its low budget the film features standout performances from its unknown cast and some really funny humor that smartly breaks much of the dramatic tension. The film really gets human nature and I found myself intoxicated by these people and their story.


“Wake” follows a young professional woman named Michelle. She’s played very well by Liz Noth who has the likable charm and charisma of a younger Natalie Portman. Michelle returns to her small hometown to attend the funeral of her friend Jess. We’ve never met Jess and we never do. And initially all we know is that these two friends had previously had a falling out and Michelle can’t even bring herself to actually show up at the wake, stopping short of Jess’ house and deciding to return to her vehicle. Later that evening, she attends a party being thrown by another former classmate and other 20-something friends who are celebrating Jess’ life. And here is where things begin to get awkward, tense, and surprisingly funny. We slowly learn more about the people that used to be in Michelle’s life and how she and Jess came to be estranged.

The film’s attentive script from writer and co-star Jake Smith is tight and true-to-life. One can easily project their own life and experiences on these characters and situation. And Darin Guerrasio, who also shows up in a small role, directs with an assured hand. The two balance serious drama and humor rather well and slowly peel back the layers on these characters as more and more is revealed about them and their past. After all, in life nobody’s perfect.

The small, intimate film looks pretty nice. With a budget of $12,000 according to IMDb, the production value impresses. There’s nothing particularly flashy about the camerawork but that’s not necessary; the film is a reflection of the human experience and it beautifully captures it simply with truth and grace. “Wake,” with its bouts of perfectly timed humor, moments of quiet sadness, and some impressive burgeoning talent, reflects an undeniable truth about life whether you’re a millennial or not: that grief comes with the human experience and everyone deals with it in different ways.  GRADE: A-