Not Another Queen Movie: The Darkly Comic “The Favourite” is a Crowning Achievement 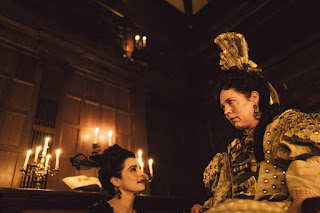 I’m just as shocked as you are: I adored “The Favourite.” This is a period costume drama for people who don’t like period costume dramas. Though I’m sure if you do like costume dramas it just might be one of your, ahem, favorites of the year. Taking a cue from the likes of “Barry Lyndon” and “Amadeus,” and set during the early 1700s, Greek director Yorgos Lanthimos’ irreverent and stunning black comedy “The Favourite” gives us a peek at the eccentric Queen Anne and her relationship with two cousins fighting to be her court favorite. It’s essentially a lavish costume drama cat fight but it’s oh so much more. Featuring a trio of spectacular leading ladies, lush cinematography, and a storyline that is as unpredictable as it is fascinating, This film is every bit as bizarre and charming as you’ve heard. It’s an odd and royal delight.

Not everyone is going to love “The Favourite.” It’s certainly an unusual film and that’s because Lanthimos is an unusual director. His most well known film is about Colin Farrell turning into a lobster. A few lobsters make an appearance in this film because apparently Queen Anne was a truly bizarre monarch. How much of “The Favourite” is historically accurate? I don’t know but this certainly is loosely based on the real life royal.

Portrayed by a commanding Olivia Colman, the Queen is an eccentric middle-aged woman constantly riddled with disease and pain. So much so that she leaves the important work to her main confidant Sarah, the Duchess of Marlborough (an equally good Rachel Weisz). Sarah’s hapless cousin Abigail (Emma Stone in one of her strongest performances) comes to court in hopes of getting work. But due to a string of events and circumstances Abigail soon finds herself in with the Queen’s good graces and soon it drives a wedge between Anne and Sarah setting off a cat fight of royal proportions.

There is also lot of political business concurring in the form of an unfavorable war with France and a scheming member of Parliament played by Nicholas Hoult who tries to use Abligail for political gain. Deborah Davis and Tony McNamara’s script can get a bit complex in that regard and if you’re not a student of British history it all may be a bit confusing but it’s not hard to get the general essence of what’s happening. The film is certainly its strongest when it’s focusing on the dynamic of the three leads, the balance of power between them, and perfectly timed dark humor.

Lanthimos brings an outlandishness to the film that makes it unlike most films of this genre. Most period pieces detailing the lives of monarchs are stuffy and feel like a history lesson. “The Favourite” is anything but stuffy. An intriguing plot development early in the film sets the stage for what becomes a an almost suspenseful tale of ladies gone mad. Colman is mesmerizing as a crazy cat lady version of a royal monarch. Stone and Weisz play so nicely off each other and each create full realized characters. Most of the time in films set in this time period everyone looks and sounds the same but here each lady is unique and spellbinding. Besides the brilliant technical production – the costumes, sets, and makeup – Robbie Ryan’s camerawork is as magnetic as the performances with stunning uses of fish-eye lenses, wide lenses, and even scenes lit with fire and candlelight.

Finding a perfect balance of drama and humor, and an interesting take on politics, power, and excess, “The Favourite” is certainly one of this eclectic year’s most eccentric yet accessible films. And with three brilliant and dynamic performances from its outstanding leads, it's thrice as good as your typical stuffy costume drama.  GRADE: A