The Rice Storm: “The Front Runner” is a Fine, If Somewhat Forgettable, Political Docudrama 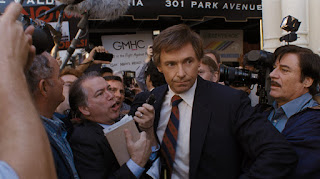 I truly believe there is a great movie somewhere in “The Front Runner” but as it turns out it’s merely a good movie, and that, I guess, can suffice. Perhaps it's a result of poor timing: I had just watched A&E’s gobsmackingly absorbing docuseries “The Clinton Affair” and no other scandalous political narrative could top that right now. The story of potential presidential candidate Gary Hart is somewhat fascinating, but it has nowhere near the notoriety of the Monica Lewinsky scandal. “The Front Runner,” from hot-and-cold director Jason Reitman, wants to be the scandalous version of “Spotlight” or “The Post” but settles for a middle-of-the-road docudrama about the derailment of a well-liked politician. I believe it wants to be a commentary about tabloid journalism and the media circus that politicians can cause but it doesn’t quite have the bite of the best movies in this genre. The film features good performances and a nice sense of time and place but ultimately the film isn’t quite as charming as the guy its based on.

Hugh Jackman is trying for that elusive second Oscar nomination but unfortunately “The Front Runner” probably won’t suffice. It doesn’t help that it’s distributor, Sony, doesn’t seem to care much about the movie having dumped it in a handful of theaters post Election Day. Had the film followed the HBO political TV movie route he’d probably be talking Emmy. The film feels a lot like the fantastic HBO dramas “Recount” and “Game Change” about recent political media storms. As a theatrical release “The Front Runner” isn’t quite up to the task of the best of the genre; it ain’t no “All the President’s Men” though I feel it strives to be.

As Democratic presidential candidate and former Senator Gary Hart, Jackman oozes with likability. There was a reason of course this man was the front runner for the nomination. The film follows reporters from the prestigious Washington Post (of Watergate fame) as they cover events leading up to the Democratic presidential primary. The film also focuses on reporters from the Miami Herald who are desperate for a story. An anonymous tip leads a group of Herald reporters to Hart’s DC house where they discover Hart seeing a young woman who isn’t his wife. Her name is Donna Rice and we never really get to know much about her. Probably because she’s played with limited range by Sara Paxton. The film also almost wastes the talent of Vera Farmiga who plays Gary’s wife Lee. She has some pretty great scenes in the film’s third act but the material from screenwriters Matt Bai, Jay Carson, and Reitman just isn’t as strong as she is.

“The Front Runner” is fine. It’s quite entertaining and I feel pretty confident saying that everyone involved behind the scenes are pretty darned talented. But there’s just something off with “The Front Runner.” The music score from Rob Simonsen is pretty great, the cinematography is adequate, the production design and costuming feels right. Maybe if it had aired on HBO it would have found greater success. The film has something to say about the behavior of powerful political people and the press but it doesn’t do anything particularly clever with the subject matter. I don’t think it speaks quite loud enough. GRADE: B-

Note: As it turns out, one of best things about the film is picking out all the timely references that were made on "The Golden Girls" at the time: everything from nods to Donna Rice and Gary Hart themselves, to Gorbachev and Jim and Tammy Bakker. Now that's a movie I want to see.