Dick Flick: “Vice” is a Darkly Comic Portrait of Power 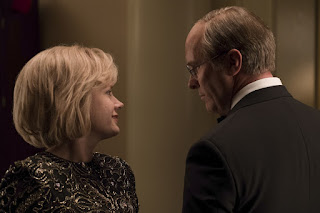 Wikipedia defines the word “vice” as “a practice, behavior, or habit generally considered immoral, sinful, criminal, rude, taboo, depraved, or degrading in the associated society.” No wonder the movie “Vice” is about vice-president Dick Cheney. Following the flashy and fun style of “The Big Short” but without all the terminology and convoluted plot that was so confusing to us general folks. Christian Bale transforms himself, yet again, this time to play Cheney as the slimy, power-hungry creep he was. “Vice” doesn’t use humor quite as much as “The Big Short” but it has some truly interesting things to say about modern politics. It may not be the sort of entertainment many of us want in these politically charged times but it’s another cleverly directed dramedy with fine performances and something to say about the state of the world we’re currently living in. Conservatives need not apply.


Let’s get this out of the way first, anyone who thought George W. Bush was a good president is not going to find much to like about “Vice.” It’s a scathing critique of him and his administration. And yet it doesn’t necessarily portray Bush and his team as complete morons… at least not too much. It’s obvious writer/director Adam McKay is making a strong political statement and there’s no dancing around that. Bush is played by recent Oscar winner Sam Rockwell and the actor does a good impression and makes a good job in the limited role. An entire film lambasting George W. is almost too easy. And you can watch Oliver Stone’s “W.” for that. Here, we witness the political rise of one of the most mysterious and least liked politicians in American history. On the flipside he was also one of the most powerful American vice-presidents, a role he himself thought of as meaningless and pointless. The film purports that the former politician and businessman sought an opportunity to be the most powerful vice president for a man who sought the presidency to please his father and not because he actually wanted the job.


McKay employs some really fun cinematic techniques which makes “Vice” more than just your standard biopic. For instance, when Cheney ends his bid for the presidency in the early 90s (mostly because his daughter Mary came out as a lesbian) the film suggests the story of the Cheney’s is over. The credits begin to roll until the film’s narrator (Jesse Plemons appearing onscreen as a blue-collar worker named Kurt) interrupts and says that’s not where things end at all. There’s even a sequence in which Dick and his wife Lynne (Amy Adams, really strong here) perform Shakespearean dialogue as they retire to bed. But as a straightforward biopic, Cheney’s story is still pretty interesting actually considering he had a lesbian daughter (played by Allison Pill) and accidentally shot a friend in the face with a shot gun during a quail hunt.


The main takeaways from “Vice” is what so many people assumed all those years ago when George W. Bush was president: that Dick Cheney was really running the show. It’s true though. Certainly your political beliefs will certainly help you decide whether “Vice” is the type of movie you find appealing but you can’t help the innovative style of McKay’s script and direction. Sure he borrows a lot of what worked in “The Big Short” but I found “Vice” way more engrossing of the two. In the end the film isn’t afraid to portray the main character as exactly what he is: a dick.  GRADE: B+