There’s Something About Barry: The Gorgeous “If Beale Street Could Talk” a Worthy Follow-up to “Moonlight” 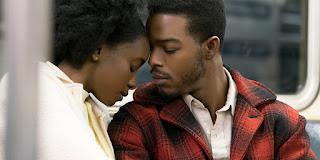 Barry Jenkins’ last film “Moonlight” ending up beating frontrunner “La La Land” for Best Picture. The two films couldn’t be more different, but they both were gorgeous feats of filmmaking. Imagine the pressure of living up to your Best Picture winner with your next film? If you want to compare apples to oranges “If Beale Street Could Talk” is nowhere near the exquisite piece of work that “Moonlight” is but it’s a beautiful film in its own right. And doesn’t that just sort of make it feel like a disappointment? It's sort of depressing how expectations play such a strong role in the moviegoing experience but I tend to find that a great movie is a great movie no matter what you may have thought you were gonna get. That being said “If Beale Street Could Talk” is a moving picture, with plenty of gorgeous camerawork - that was also a highlight of “Moonlight” - but it’s a more traditional storyline and narrative and it therefore doesn’t quite feel as impactful. The film’s story is certainly one that make sense in today’s divisive world but I think there are more powerful pieces of work that have similar things to say. The acting is great and the characters are well-developed.

Taking place in New York City in the early 1970s the film follows young lovers Tish (Kiki Layne) and Fonny (Stephan James). The two grew up together and eventually it turned to love. But then Fonny is falsely accused of raping a woman and goes to jail. Shortly after Tish finds out she’s pregnant with Fonny’s baby. Tish tells her family who is supportive considering she’s only 19 and her boyfriend is in jail. Her mom Sharon (Regina King) and her father Joseph (Colman Domingo) invite Fonny’s family over to tell them about the pregnancy – in a fantastic scene of family awkwardness – and they are less than thrilled. Tish, with the help of her loving mother set out to prove Fonny’s innocence. Meanwhile the film crosscuts with Tish and Fonny’s blossoming relationship and the events that lead to his arrest.

Barry Jenkins’ direction, as in “Moonlight,” is lyrical and visually stunning. Characters looking directly into the camera is effective. Jenkins has a love affair with closeups. Cinematographer James Laxton’s lensing is scrumptious – a simple image of a red umbrella in the rain is burned into my memory. Composer Nicholas Britell’s bluesy, horn-infused score is as beautiful as the imagery. All the performances are good – Layne and James have a particularity strong chemistry that radiates off the screen. King is great as the supportive mother but I wasn’t especially wowed considering her Oscar frontrunner status.

Overall there is a lot to love about “If Beale Street Could Talk” it’s a movie that raises important issues, but doesn’t shove them down your throat. The film still makes powerful statements about police corruption and the unjustly incarceration of African Americans while still leaving you feeling somewhat hopeful. The film really is a beautiful love story based on James Baldwin’s novel of the same name. The film certainly doesn’t reach the high bar set by Jenkins’ previous effort but it’s certainly a worthy successor. I’m ready to see what else he’s got up his sleeves.  GRADE: B+