Fedora the Explorer: Spielberg and That Star Wars Guy Whip Up “Indiana Jones and the Kingdom of the Crystal Skull” 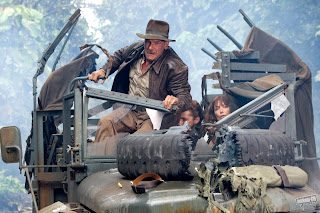 My favorite Indiana Jones movie is ‘Temple of Doom.’ You know the one where the Indian cult rips peoples’ hearts out? The one with that little Chinese kid? The one that got parents all over the country up in arms about motion picture violence which in turn caused the MPAA to issue a producer-friendly PG-13 rating that changed the way films are marketed towards the young ones? Yeah that one. So if you really want to know what I thought of the new Indiana Jones maybe you should stop reading. You know why? Because I actually think this fourth installment is better than ‘Raiders of the Lost Ark.’ Yeah you read that correctly, the one with the big boulder and the melting face? It’s better.

The film opens up in a fun way that reveals the story’s updated timeframe. We’re now in the fifties, which means fear of Communism of course. Nazis are out, Russians are in. Speilberg stages this stuff we ease and it’s interesting to see how far he’s come as a filmmaker since the last Indiana Jones film. Since then he’s matured with darker themed works like Schindler’s List, Saving Private Ryan and Munich, but he certainly hasn’t lost his sense of fun. His cinematographer Janusz Kaminiski adapts his trademark dark and gritty style for a much more bright palate that fits the brighter tone of the film. Yeah the movie has it’s dark creepy parts (like the other three) but the film is not afraid to be as funny as it is action-packed.

Speaking of action, yes there is lots of it. And even though Harrison Ford is pushing through his sixties he can just jump and run with the best of ‘em. Shia LaBeouf is a great addition, although if you’re expecting a Short Round replacement, you’ll feel disappointed. The pair works well together much in the same way Ford and Sean Connery worked so well in ‘Last Crusade.’ I want to reveal very little about the film’s story as to keep you all in dire suspense, but I will say like the others it has a supernatural-type of element that actually works and isn’t quite as silly as you would think.

If anything, I will say the beginning of the film sort of felt a little slow for me. There is a bunch of exposition that mostly went over my head, but once Karen Allen returns as Indy’s love Marion, things certainly pick up. And let’s just say the film’s best asset is that of super chameleon/actress Cate Blanchett who is simply sensational as the villainous Irina Spalko who is determined to get her hands on a certain type of skull made of crystal (cue the McGuffin) which gives the film its title. What a fun villain this is. After all, a movie is only as good as its villain.

Overall, this new Indiana Jones adventure is a good time. David Koepp’s script is fun and fast paced and its good to see George Lucas focus on something besides “Star Wars” for once. If you like the original films, you’re bound to enjoy this. And darned if John Williams main theme isn’t one of the greatest ever composed. As long as you’re not expecting the second coming of Christ, you could do a lot worse than ‘Kingdom of the Crystal Skull.” GRADE: B+