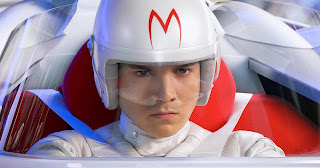 Some people may tell you that after watching “Speed Racer” up on the big screen, you will get a) a headache b) motion sickness or c) a massive seizure. Well I didn’t really get any of those things. What happened to me while sitting in my seat for over two hours was shear boredom. I felt like I was playing Mario Kart but I wasn’t actually playing. I felt like I was watching someone ekse play Mario Kart and watching someone play videogames isn’t really fun. I wish I had a headache and I wish I had a seizure, that way at least I know my body would have had some other kind of physical reaction to the Wachowski brothers' latest flick. It almost reminded me of “There Will Be Blood.” These two films are COMPLETE opposites yet they both caused the same exact feeling in me: the need to never see either film again.

I had my doubts about Speed Racer from the beginning. Yes it looks like a wild videogame gone bad. It’s as if it had been designed by a videogame maker while that person was high on LSD. In fact, and I’m not advocating drugs or anything, but I’m sure crackheads will get much more enjoyment out of this film than any other normal man, woman or child who sees it. I honestly thought it looked “cool.” I’m the last person who advocates seeing a movie just because of its visual style, after all it took me about eight years just to watch the first Matrix movie. But there was just something so fun and colorful about Speed Racer’s advertisements that sort of drew me in like a moth to a bright light. Or a moth to a bug zapper I should say. And the cast. What a great cast. We’ve got Emile Hirsch hot off his standout film Into the Wild. Susan Sarandon, who rarely makes bad movies. John Goodman, Christina Ricci (who I’ve always been a little wishy-washy about) and Lost’s Matthew Fox. Everyone is very good, but this is definitely not an “actor’s movie.” So yes the film is colorful and is probably a colorblind person’s nightmare and the actors are all decent in their roles, but other than that Speed Racer has very little to offer.

In all honestly I was hoping for the best here. The plot, which many are saying is lame, to me, is just confusing. Young Speed (Hirsch) wants to be a racecar driver when he grows up even though his older brother died in a fiery crash. A corporate guy who sponsors only the best drivers wants to sign Speed but he insists on not becoming just a product. There this is some kind of subplot involving an Asian guy and then there are some Matrix style marital arts moves. Oh yeah and Speed’s kid brother has a cute monkey for a pet. Meanwhile we get lots or computer enhanced racing scenes that are completely devoid of suspense or excitement. I at least hoped that these scenes would be thrilling because the story did absolutely nothing for me. In fact I don’t really know who exactly would enjoy this movie. My knowledge of the cartoon the film is based on is limited to what I've seen in that Geico commercial, but I imagine the film is for diehards only and has very little mass audience appeal.

Remember I said this film reminded me of “There Will Be Blood?” Well they are very different films. Blood is very slowly paced, a subdued color scheme and limited effects (if any really). Speed Racer has an edit every millisecond, has more colors than that huge box of Crayola crayons you begged for as a child, and more CGI than a Pixar movie. They both are technically very different, but to me both belong on the “is this movie over” category. I didn’t note hate Speed Racer. I didn’t run up to the box office demanding a refund, but for all the bells and whistles, the movie just doesn’t have too much to offer. Go see “Iron Man” again instead. GRADE: C

NOTE: While it may seem crazy for me to compare the Academy Award-winning film “There Will Be Blood” (a film I didn’t enjoy but appreciate for its artistic merit) with the hyperactive will-cause-ADD-in-children film “Speed Racer” I am merely pointing out that idea that two completely different styles of filmmaking could have the same effect on me.

That is a good tip especially to those fresh to the blogosphere.
Short but very precise information… Thanks for sharing this one.