Home on Derange: The Home Invasion Thriller “The Strangers” is a Shocking Creepfest 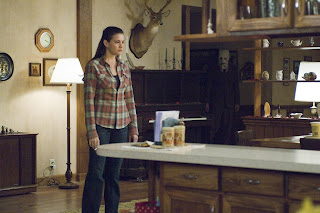 There’s nothing more frightening than the idea of home invasion. Knowing that someone could enter your home to do whatever he or she wants. To kill? To steal? Sure in scary movies anything can be scary whether it’s ghosts, aliens or monsters. But nothing is more terrifying than a human being with the intent to kill. Have them put on a creepy mask and you have pretty much one of the worst things to fear in the world. Now imagine you are home alone, in the middle of nowhere and someone starts banging on your front door. You call a loved one on the houseline but you get cut off. You race to your charging cellphone and realize that someone has taken it. Before you know it a guy with a burlap sack over his face is leering at you through your bedroom window. All of this occurs in the latest scarefest “The Strangers.” And I think I now need a new change of underwear.

“The Strangers” is a completely frightening and intense experience. It has one of the most effective and suspenseful premises, which is fearsome idea of home invasion. There are three masked psychos who are after a couple played by Liv Tyler and Scott Speedman for no other reason than “because they were home.” Kristen (Tyler) and James (Speedman) return to his family’s vacation house late one night after a wedding. We sense that something is off about the couple. They seem like they’ve recently had a fight. It looks like James wanted to propose and it seems as though Kristen wasn’t ready to accept his proposal. There’s a knock at the door and a young woman, cast in shadow, asks for Tamra. They insist she has the wrong house and that’s that. Before they know it these “strangers” are completely terrorizing this couple which they soon find out won’t end until someone is dead.

Now it is important to note that this is much more of a thriller than a standard horror flick. It has much more to due with classics like “Halloween” than it does with typical modern fare like “Hostel.” This isn’t a torture porn feature that relies on gruesome gore to get a reaction from the audience. You could writer/director Bryan Bertino has been influenced by the likes of early John Carptender and even Alfred Hitchcock in that it’s more important to establish character and create suspense. The film takes it’s time to get going and builds and builds and builds to the point where you’ll be squeezing the armrest or the person next to you. Bertino would rather scare his audience with a creepy mask by slowing revealing the killer behind the protagonist than by just cutting someone’s head off.

This is a very simplistic movie that pretty much does everything right. The actors are good and Liv Tyler actually makes quite a good Scream Queen. The characters don’t do anything too stupid except for one instance where James leaves Kristen all by herself in the house (and he’s got the shotgun!). We don’t learn anything about the killers except that they are only human beings. We know they aren’t’ just about wanting to murder; they want to psychologically taunt this couple. This movie succeeds where other recent attempts at horror have failed (like the Saw films for instance) because the story is simple and to the point. You can relate to the realist situation going on and realize that it could happen to anyone, anywhere. There’s no real motive, no twist, no surprising revelation just good old fashioned scares. This film feels like it was made during the 70s, where the less shown is more. It’s sort of “Last House on the Left” meets “Texas Chainsaw Massacre” meets “Halloween” meets “When a Stranger Calls” meets “In Cold Blood” which means if you even remotely liked any of the movies I just mentioned, this will be right up your alley.

I am reminded of the film “Funny Games” which came out a few months ago in which a team of young men psychologically and physically abuses a family to death. That film had something to say about violence in the media and how American audiences perceive violence as entertainment. This is really the type of movie that Funny Games was trying to dismiss, but you know what? “The Strangers” is much more about atmosphere and suspense. Yeah it’s sort of depressing and makes you feel bummed out in the end, but if a movie can scare the crap out of you and make you scared to return home, it definitely has done its job.

PS – The movie is supposedly based on a true story. As to what specific case this is based on I don’t really know, but I believe it to be based on several incidents and not one specific crime. GRADE: B+

Uhm...excuse me, I believe I said you needed to pay me to advertise...since you're also using blogger, I'll give you a free pass, but next time, i want at least a buffalo chicken wrap as payment, I will accept food as an alternative!

You have touched somе good factors here. Any wayy κeep up ԝrinting.