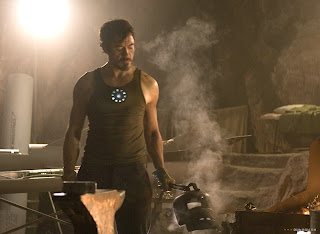 Remember the first time you went to see your favorite superhero movie? I remember mine. It was about six years ago, when the first Spiderman movie opened. I had never been much of Spiderman fan before. I never read the comics. I basically knew nothing about Spiderman at all. I saw the movie and everything changed. I wanted to be Spiderman. I would bounce on my trampoline pretending to shoot webs out of my wrists. I had the soundtrack, which I would listen to on repeat. Spiderman was the movie to see in the summer of 2002. No other superhero movie has come close to reliving that feeling in me. Yes Spiderman 2 was technically a better movie than the original but by that time, my obsession with Spiderman seemed to wan. Flash forward six years later and here we have another summer with a superhero headliner: Iron Man. While the film doesn’t make me want to act like a total loser on my trampoline, its probably one the better comic book adaptations to come in some time. Many are saying that most of the success is related to star Robert Downey Jr. which is mildly true, but really what we have here is an all around fantastic movie with great characters, acting, special effects and most importantly a script that doesn’t make you feel guilty for paying so much to attend the movie.

As directed by Jon Favreau whose previous directing efforts include ‘Zathura’ (?) and ‘Elf’ (!), Iron Man is a well-made comic book adaptation that is successful in many ways. First, it is impeccably cast. Downey Jr. in my opinion doesn’t necessarily scream “superhero” but he really shows off his skills here as Tony Stark. Stark is basically like Batman’s Bruce Wayne but with a much more fun and bright personality. His parents left him as heir to their wealthy weapons company Stark Industries. While in Afganistan there is an attack and he becomes held captive for three months. He escapes when he builds a suit made of various metals. This experience changes him for the better and he perfects a better suit that can fly and shoot at bad guys. He’s cared for by his own younger and curvier version of Alfred: Ms. Potts (a surprisingly good Gwyneth Paltrow). Stark decides that his company is “wrong” for supplying weapons of mass destruction; Stark’s business partner Obadiah Stane (a bald Jeff Bridges) doesn’t like this too much.

What is so great about the movie is that it’s witty and funny without being silly (see Fantastic Four). It takes itself seriously like Batman Begins, but it doesn’t wallow in the boring psychosis of its main character. We get learn who Tony Stark is through his actions and dialogue, we don’t need to see inside his head to understand his personality. There really isn’t a scene that is wasted and instead of being constantly bludgeoned by action scene after action scene the script (from two of the writers of ‘Children of Men’) features Stark becoming Iron Man rather than fight scene after fight scene. It’s a movie that is superbly balanced. You wont be saying, “oh he takes too long to become Iron Man” and you won’t be saying, “He becomes Iron Man too quickly.” It follows a perfect pace that lets the characters become enjoyable to the audience without the kitschy dialogue usually found in these movies.


I knew nothing about Iron Man going in and I was pleasantly surprised. You don’t need to be a fan to enjoy the movie, which is what good comic book movies know how to do best. They can please longtime fans and make new fans all within two hours. This is a movie that deserves a metal of honor. Get it? Iron Man is made of metal. See, the movie doesn’t include corny jokes like that. It is smart and fun and a great start to summer season. Can’t wait for part 2. GRADE: A-