Young At Heart: “The Curious Case of Benjamin Button” is a Fascinating Piece of Art 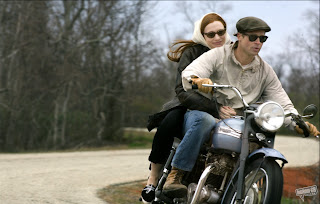 “The Curious Case of Benjamin Button” defines the reasons we go to the movies in the first place. It tells an interesting and original story. It uses exciting cinematic techniques to tell its story. And it’s entertaining through it’s nearly three hour running time. In an age when movies are unnecessarily long (see “Australia” or “There Will Be Blood”) it’s good to know there are ones that are actually necessarily long (see “Titanic” or “Magnolia”). This film I believe works despite its length and there are likely to be people who disagree, but the movie presents us with such a fascinating story that the length never seemed to be bothersome. “Benjamin Button,” based on an F. Scott Fitzgerald short story of the same name, is simply about a man who was born as an old man and ages backwards. Therefore when he’s twelve he appears to be 70 and when he’s 70 he appears to be a young boy. It’s a weird premise that just simply works mostly due to some standout performances, special effects and David Fincher’s assured direction.

The film, like most these days, has a framing device. The story takes place during present day, or more specifically New Orleans circa Hurricane Katrina. An old woman is dying in her hospital bed and her adult daughter is by her side (Julia Ormond). The daughter begins to read a diary written by a man named Benjamin. We begin to see how this man was “born under unusual circumstances.” Benjamin was born in 1918 looking all wrinkly and his father took one look and decided to abandon him. The baby is taken in by Queenie (an outstanding Taraji P. Henson) who runs a sort of old age home. We then get to see how this baby actually begins to look younger as he grows older.

This is achieved with some of the best cinematic wizardly of recent memory. Most of the time we see what appears to be a young boy with Brad Pitt's head made up to look like an old man. I assume it’s equal parts CGI and prosthetic make-up. It’s 100% convincing. I’m not even sure when Brad Pitt actually appears on screen as a full human being, but he’s stupendous anyways. He doesn’t give a showy bravura performance but it’s still affecting and is one of his best performances to date. It’s obvious he could act circles around the other Hollywood heartthrob Tom Cruise any day of the week.

I think what is so amazing about the film besides it’s “Forrest Gump”/”Big Fish”-like story of a simple man whose life was anything but simple, is how easy it is to buy into this premise. It doesn’t nearly seem as far fetched as it could have been in less talented hands (it's screenplay was written by "Forrest Gump" and "Munich" scribe Eric Roth). It’s a technical achievement through and through, but let’s not forget that this is a film brimming with not only great technical achievements but stong themes of love and loss and great performances as well. Pitt, like I said, is great in the title role. You almost feel as if it were made for him. When you finally get to see Benjamin as a young guy you’re immediately drawn to why he is such a celebrity in the first place. The same with Cate Blanchette, as Daisy, who is the love Benjamin pines for throughout the film. She gives her usually majestic performance, but it’s obviously Pitt who has the showier role. But don’t worry, we get to see her with old lady make-up as well.

“The Curious Case of Benjamin Button” is a movie that you feel confident saying was the reason movie cameras were made for in the first place. It is sweet, and weird, and beautiful and absorbing and touching. It might even bring a tear to your eye. This is the type of fantastical film that I enjoy (it has an unrealistic element, but plays it realistically). You can tell it’s working extra heard to make you believe every moment of what’s happening on screen. It defines cinema in all aspects and should rake up nominations when the Academy announces the nominees in January. Bravo to all involved. GRADE: A

I am continuously invstigating online for posts that can benefit me.
Thanks!

Here is my webpage: academia.edu

This iss my first time visit at here and i am in fact pleassant to ead everthing at
alone place.

Loook into my web site; how to make my penis bigger (penisenlargementexercisesxl.blogspot.com)