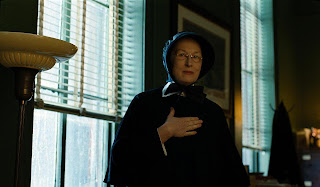 “Doubt” is the type of movie that I can’t recommend to everyone and for several reasons. If you’re a fan of good acting then I would say see it. If you hate pretentious dialogue that is constantly reflecting the story directly then I would say skip it. If you enjoy top talent having “dialogue matches” in which people fight with looks and gestures and sharply written dialogue I would say see it. If you hate movies that seem small, intimate and “stagy” I would say skip it. And of course, if you are fan of Meryl Streep, you’ve got to see it. It’s obvious that she’s on her way to her 15th acting Oscar nomination with “Doubt” in which she plays a strict nun who confronts a priest when she learns that he may be abusing a Black school boy.

“Doubt” is an actor’s dream. It’s a movie (and I assume the Pulitzer Prize-winning play is as well) that actors would look to when trying to hone their craft. Well I would anyway. I mean just look at its recent SAG nominations. It received 5. It’s pretty astounding considering there are only 5 categories to begin with. Every principal cast member was nominated by their acting peers and it’s obvious that “Doubt” is a tour de force of the art of drama.

As an actual film I think it’s a little less successful. There really isn’t a problem with the story, but I guess how it plays out isn’t nearly as interesting as the trailer would have you believe. The film takes place during the 1960s in a New York borough. Meryl is Sister Aloysius Beauvier who is the principal at a Catholic elementary school. This sister hardly puts the pal in principal. She is stern and intimidating and most of the kids are scared of her. In fact Father Flynn (Philip Seymour Hoffman) says that “the dragon” is hungry when she scolds a child and drags him away by his ear. Sort of like Helen Mirren managed as Queen Elizabeth in “The Queen,” Meryl here almost makes you feel as if you should stand up when you see her on screen. I was scared of her just as much as her students. Happy-go-lucky Sister James (a perky and perfect Amy Adams) begins to notice Father Flynn’s closeness with one particular student. And in a moment of uncertainty confesses to Sister Aloysius that she believes Father Flynn has been hurting little Donald. We don’t see anything, so we, like her, are very unsure. But she makes the accusation anyways. And now it’s up to Meryl and her habit to out-act Hoffman in the showdowns of showdowns. Of course that’s what’s supposed to happen.

If anything, the final “confrontation” isn’t as intense as you’re lead to believe it may be. Meryl almost crosses the line into overacting for a few seconds, but it won’t cost her a nomination. A real great performance is that of Viola Davis, who plays Donald’s mother. Her one scene is affecting and powerful. She’s also a sure thing for Supporting Actress.

“Doubt” which was directed and adapted by the original playwright John Patrick Shanley, is by no means a horrible movie. It actually features some great framing and compositions by DP Roger ‘Fargo’ Deakins. It has style to spare and features authentic production values. See it to observe some great acting but if you’ve already seen the play on which it’s based then I doubt you’ll find anything new in the film version. GRADE: B

But one of the trends in San Francisco nowadays is the Speed Dating.
When car or truck lovers start talking about their vehicles and vehicle modifications,
you can bet it certainly won't be a long time before the topic of chipping
shows up. These devices were used to track their units and even enemy targets.