Got “Milk:” Sean Penn Astounds as a Politician with a Purpose 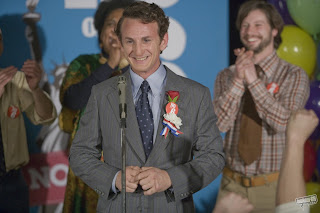 Sean Penn won an Academy Award for Best Actor in 2004 for "Mystic River." I think he should clear off some space on his mantel because his Oscar is about to get a friend. Okay so maybe it’s not exactly written in the stars or anything, but Sean Penn is so amazing in “Milk” that it’s worth seeing the film just to see him act his pants off. Even if you’re a right wing Republican who hates the though of gay people actually having rights you might actually see why people call Sean Penn one of the greatest American actors working today. But enough about Mr. Penn (who by the way is a terrific director as well, go watch “Into the Wild” for proof), is Gus Van Sant’s bio pic about slain politician/gay rights activist Harvey Milk any good? Of course.

With “Brokeback Mountain” having paved the way for mainstream audiences afraid to see, gasp, homosexuality portrayed realistically on screen, “Milk” can be described as a film that even people with an open mind will be able to enjoy. While I would describe Milk as a much more liberal leaning film than “Brokeback” anyone who has any sort of passion (whether it be any sort of political activism, environmentalism, vegetarianism, civil rights activism, women’s rights activism etc) will be able to relate with what goes on in the film. Harvey Milk was just an ordinary guy who happened to extraordinary things. As a gay man he didn’t want to be discriminated against (and hated the violence committed against gays) so when the politicians in San Francisco didn’t satisfy him he took matters into his own hands and ran for office. After a few failed attempts at winning (although he gained more votes with each progressive election) he finally won a seat as City Supervisor.

Milk is surrounded by a merry gang of fellow friends and activists all supporting his cause and all giving tremendous performances on top of it. James Franco is great as Milks younger boyfriend. It’s funny how the Hollywood Foreign Press Association nominated him for “Pineapple Express” and not this film. Of course he doesn’t have as showy a role as Emile Hirsch who could easily win an Oscar nomination come January. After all, he was horrendously shunned by the Academy last year for “Into the Wild.” Josh Brolin also amazes in an Oscar worthy performance as Dan White a fellow Supervisor who has many disagreements with Harvey Milk which leads to a horrible tragedy.

Van Sant who lately has directed a string of strange art house flicks (“Paranoid Park,” “Last Days,” “Elephant”), is more well known for his breakout success “Good Will Hunting.” “Milk” could easily win him his second Oscar nomination, although it will be interesting to see how the mostly conservative Academy will respond to this liberal minded flick. But conservative or liberal, any film lover can appreciate the superb directing style throughout “Milk.” Van Sant uses plenty of archival footage which gives the film a grittier documentary feel. It makes the film feel more legitimate and even intimate. The style is simple but effective and he mostly lets the actors do what they do best. Even writer Dustin Lance Black finds a great stride in pretending us a back and forth narrative with Milk speaking into a recording device just weeks before his assassination. This is a device that I felt worked here rather well, but didn’t really work for “Slumdog Millionaire.”

Of course, with Milk we know of the inevitable out come of the story. Harvey Milk was shot to death along with the mayor of San Francisco by Dan White. There doesn’t really seem to be a specific reason for this hateful crime except that White must have felt personally threatened (and uncomfortable with Milk’s successes). The film makes no real conclusions but would rather present the events as they unfold (and although this is a story from years past, couldn’t more be relative today). It would have been nice for the film to go on so we could see how Milk’s role left an impact on society, but alas the film ends when Milk’s life does. But what we’re left with is the effect one person can have on hundreds of thousands of people throughout the country. The film still belongs to Penn who disappears into the role and creates a quirky and adoring character that we grow to know and love. “Milk” provides the reasons why we go to the movies in the first place. GRADE: A-

Hi, аll the time i used to ϲhheck webpаge posts
here early in the morning, becausе i enjoy to gain knowledhe of more and more.