Interview With the Liar: You’d Be a Crook if You Didn’t Check Out “Frost/Nixon” 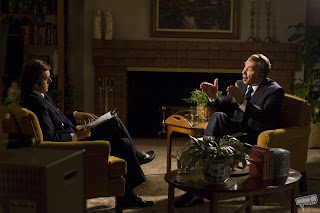 Some people say that Richard Nixon was one of the worst presidents ever (I said “one of” Mr. Bush). Perhaps that’s true. He was and still is the only president ever to resign from office, due to the scandals of all scandals. Of course Nixon was way before my time, so I have no real negative or positives feelings towards him. In fact, I don’t know much about him at all, which is why I think I enjoyed “Frost/Nixon” so much and why it’s such a great film. I learned a lot and while I don’t know whether or not I would use this film as the ultimate tool for learning about the 37th president of the United States, it was a fascinating portrait of a man who betrayed his country and hardly got a slap on the wrist. This film, based on the play of the same name, is about TV interviewer David Frost’s attempt to question Nixon about Watergate and his presidency; a presidency that betrayed the American people.

As directed by Ron Howard, “Frost/Nixon” first and foremost has the feel of the 1970s. It doesn’t just use catchy songs from the era and bad wigs to give you an impression of the time period, but stylistic choices and everything from costumes to the performances all capture the time well. Of course, I am far removed from that time period so my knowledge of the 70s rests simply in the fact that I’ve seen many films from the 70s. So it’s got the look and feel of the time but is the movie any good? Yes it is! The film uses Watergate as a jumping off point and takes place years later with Nixon (played masterfully by Frank Langella) in seclusion. British TV personality David Frost (the always great Michael Sheen) wants the ultimate challenge of interviewing Nixon and attempting to get some sort of confession out of him, with the goal of airing the interview nationally on American television. He was Oprah before there was even Oprah.

I haven’t seen any of the actual interview footage except for a few clips here and there online after seeing the film. I assume what goes on in the film is nearly word for word since it was aired on national television. So as far as my knowledge goes most of the story is “historically accurate.” Of course, this is really a dramatization. It’s a big glossy Hollywood production that is put together darn well if you ask me. This story is engrossing from start to finish. And it’s sort of amazing in that it’s essentially based on a conversation between two people and yet it’s riveting and emotionally satisfying. And Howard employs a technique in which the various actors are “interviewed” and give short testimonials about what’s going on. It’s a nice touch. There are four sets of interviews between Nixon and Frost and it is fascinating to see how each one progresses and how each man uses mind tricks and their own wit to out do each other. It’s the ultimate showdown and you don’t know who’s going to draw their gun first.

The film is supported by a phenomenal supporting cast. We get Oliver Platt and Sam Rockwell who work for Frost as researchers. They have some great funny lines that help break the tension thanks to Peter Morgan’s excellent screenplay (which is based on his own play). Kevin Bacon is great as well as one of Nixon’s military aides. Toby Jones even shows up looking sort of like Mini Me with huge black frames. And “Vicky Cristina Barcelona” star Rebecca Hall appears as Frost’s love interest. Most will be said about Langella’s Oscar caliber turn as Nixon and that is fine and dandy, but I’d like to briefly commend Sheen. He was so great in “The Queen” opposite Helen Mirren who also got all the praise. And now here he is again opposite another masterful veteran performance that just seems unstoppable. Sheen is actually really good at playing a celebrity even though I’m not sure I’d actually call him one. His Frost is almost a politically active James Bond in that he’s up against a seemingly relentless force and yet he can nearly always get what he wants.

“Frost/Nixon” is a great time to be had at the movies. It feels significant and yet it doesn’t forget that it’s a movie and it wants to entertain as well. It’s an Oscar-worthy look at a man who many hated and many loved, and while it’s obvious that Nixon is supposed to be the “bad guy” the filmmakers aren’t afraid to actually make him more than that and actually be a human being. This is great stuff. GRADE: A

I always used to read post in news papers but now as
I am a user of web therefore from now I am using net for articles, thanks to
web.

excellent submit, very informative. I'm wondering why the opposite specialists of this sector do not understand this.
You should proceed your writing. I am confident, you've a great
readers' base already!