Bedtime Stories: Kate Winslet is Perfect in “The Reader” 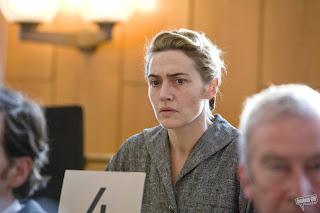 Kate Winslet needs an Oscar stat. She is always so good and it’s not as if she’s always overlooked because she’s been nominated five times already and she’s only 33. It’s just that she always seems to be nominated in a year when she’s not considered the front runner. Helen Mirren, Hilary Swank, Jennifer Connelly, Helen Hunt, and Mira Sorvino have all snatched away the little golden man away from poor Kate. This year, if Kate can manage to be nominated for "The Reader" in the supporting role she has a very good shot, although Penelope Cruz seems to have a leg up. If she’s nominated for "The Reader" as lead actress (which is sort of unlikely but certainly a possibility) then she’ll probably have a better shot because Winslet is absolutely outstanding as an illiterate former Nazi guard who has an affair with a teenage boy (Not only is she absolutely outstanding but she’s absolutely a leading role).

This is one of those performances like Felicity Huffman in “Transamerica” or Helen Mirren in “The Queen” or Charlize Theron in “Monster” that actually raises the film to another level entirely based on an individual performance. She’s the sole reason to see the movie although the movie itself is not on the same level as her performance, it is certainly a fascinating look at morals and ethics that will certainly raise many questions once the film has ended. The film takes place in Germany in the 1950s. A lonely woman named Hanna Schmitz (Winslet) works as a train worker begins an affair with Michael (David Kross). On his way home from school one day he gets ill right in front of her apartment. She takes him in, helps him clean up and escorts him home. He insists on thanking this kind woman so he brings her flowers. Before he knows it she’s seduced him and they spend nearly ever afternoon in a passionate, naked embrace. He’s also an intelligent young man and Hanna insists that he read to her, which he does. He reads novel after novel and this foolish affair lasts an entire summer until one day Hanna is gone without a trace or explanation.

Years pass and Michael moves on. He attends law school in the 60s and he gets to sit in on a special trial in which former Nazi death camp guards are being put on trial for murder. Wouldn’t you know that Hanna Schmitz just so happens to be one of the accused women. Michael is completely shocked and horrified that the woman he loved and cared for so much worked at a death camp. This brings up so many issues in that could a person continue to love someone once they discover that person had a particularly horrible past life? “The Reader” is interesting in that it’s technically a “Holocaust drama” but it doesn’t focus on the Holocaust at all. The film is entirely set years later and is more about the moral delimma one faces when they are “forced” to participate in horrific acts of human bloodshed. Hanna is accused of guarding an entire building of Jews who all burned to death when she refused to unlock the door. She was just following orders right?

“The Reader” is one of those movies that sort of changes midway through. It begins with a torrid love affair and turns into the story of a forlorn woman who accepted a job at a Nazi death camp. Hanna is not always likable but she is certainly sympathetic and as we witness the years pass and more and more wrinkles appear on her face we begin to realize the toll that all of this has taken on this woman. What is most fascinating, I believe, is Michael’s reaction to all of this and how it affects him as an adult (played by Ralph Fiennes). After all, this was a woman who he felt so passionately about. It’s difficult to imagine the person you love doing despicable things. I have a feeling that this is Kate Winslet’s year at the Oscars. At least she doubles her changes with Revolutionary Road, as long as it doesn’t cost her a nomination. Now that would be horrific. GRADE: B+