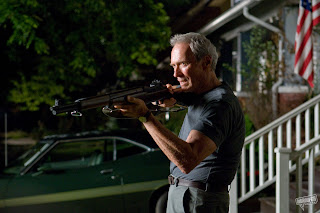 Call it the rival of “Dirty Harry.” Call it “Grumpy Old Man.” Call it what you want, but “Gran Torino” is an emotional and engaging drama staring and directed by Clint Eastwood. It pretty much amazes me how this old man, who obviously refuses to give up making movies even though he’s 78 and counting, can churn out good movie after good movie. I mean he’s bound to have a critical bomb at some point right? Eastwood has become like Meryl Streep: a seasoned veteran who gets award recognition for nearly everything he does. And with Gran Torino, which he claims is supposed to be his acting swan song, he is definitely a strong contender in the Best Actor Oscar race. It only helps him that he spits out racist epithet after racist epithet.

Stories involving racism in movies sometimes walks on a fine line. It’s very easy to go overboard and become mean-spirited. Eastwood plays Walt Kowalski who is a retired Korean War vet. His wife has just died and he lives alone, nearly estranged from his two grown sons and their families living in what has become a sort of run down neighborhood populated with Asian Americans. He doesn’t know his Hmong neighbors living right next door at all. A young teen named Thao (Bee Vang), tries to steal Walt’s vintage Gran Torino one night as part of a gang initiation which he had been very hesitant about in the first place. Walt nearly shoots the poor kid in the head with his rifle and tells the kid to never show his face again. On another evening Walt scares off the gang that tried to make Thao steal the car, causing Walt to be considered a hero in the neighborhood. They bring him lots of food and flowers and he insists that he just wants to be left alone. That doesn’t stop him from befriending Thao’s sister Sue (Ahney Her) and her family.

What is so great about “Gran Torino” is that fact that Walt continues to use racist words (in increasingly hilarious ways) but his character does still change and adapt. It is hard to like someone who seems so mean-spirited, but you can see that Walt has a soft side and trying to get that side out of him is what becomes so fascinating. An old man like Walt isn’t going to all of a sudden stop saying mean things but he does slowly unravel and begins to see his Hmong neighbors as people rather than just typical Asian stereotypes. And the fact that these people aren’t too bothered by what Walt says shows that they are tolerant of people who aren’t necessarily tolerant themselves. Soon Walt becomes sort of a father figure to the shy, young Thao and shows him how to be a man and helps him come out of his shell. He also is completely intolerant of Thao’s cousin who is the gang leader who continually harasses Thao and his family complete with drive by shootings and beatings.

Eastwood always directs movies in which it’s nearly impossible to figure out where the stories are going. There are always surprises and it’s always told in a fascinating way. Writer Nick Schenk offers a winning script that is intriguing to watch unfold. I really enjoyed watching Walt’s relationship with his neighbors develop. He begins as a crotchety old man and becomes a crotchety old man who cares. Since he doesn’t have a very good relationship with his family (he kicks out his song and daughter-in-law on his birthday when they try to convince him to movie into a retirement village) it’s only natural that he would start to become close to his neighbors who he gets to know as the film progresses. The fact that he says racist remarks almost always his targets says a lot of his past as a Korean War vet. He has serious regrets about his role in the war and the people he killed and it has completely shape the man he has become. It is seriously amazing to watch Eastwood in this role of a man who at the beginning seems so dislikable and yet you feel emotionally attached to him by the film’s end.

“Gran Torino” is a great addition to Eastwood’s already terrific list of credits. It’ll be interesting to see what the Academy thinks of his work here. They would be foolish not to reward a man for turning a phrase like “Get off my lawn!” into one of the most commanding and threatening lines of dialogue since Dirty Harry insisted that you make his day. GRADE: A-

Remove essay term paper writing service materials those are chancers or
failed students who turned in, you should remember that this essay.

Immediately Treat the disease you are suffering, before it gets worse