Lord of the Ring: Mickey Rouke is Revived in “The Wrestler” 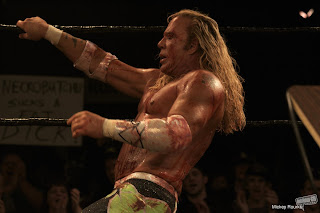 “Sean Penn won an Academy Award for Best Actor in 2004 for ‘Mystic River.’ I think he should clear off some space on his mantel because his Oscar is about to get a friend.” I think I should eat my own words. That is the opening to my review for “Milk” in which I proclaimed that it’s very likely Sean Penn will win another Oscar for his fantastic performance as Harvey Milk in “Milk.” Bu then along came Mickey Rourke as “The Wrestler.” Rourke is also amazing in this film in which he plays “a broken down piece of meat” (aka a professional wrestler way beyond the high point of his career) who only knows life as a man made famous for beating up other guys. He only knows how to be a wrestler and when it turns out he can’t wrestle any more, it’s as if his entire world has ended.

Apparently “The Wrestler” has resurrected Mickey Rourke as an actor. Of course, we can’t forget that he showed us his ugly face (with a good make-up job of course) in 2005’s “Sin City.” But no one was going to give out awards for that film. And here we are three years later and we’re actually mentioning the name Mickey Rourke with words like “Academy” and “Award.” Hollywood loves a good comeback story which is why Penn should look out, because Rouke is bringing up the rear and he really wants a little golden man!

“The Wrestler” is a simple story but director Darren Aronofsky makes it a gritty and intimate experience. Rourke is Randy Robinson. His wrestling name is “The Ram.” He was really big in the 80s. But now he’s sort of out of his element. He does still “perform.” Like any rational person would realize, wrestling is as much a performance as it is a “match” (aka wrestling is FAKE). Randy lives in a crappy little trailer and he could barely afford his rent. He has no family or friends to speak of except for an estranged daughter (Evan Rachel Wood) who wants nothing to do with him. His “family” consists of his fellow wrestling buddies who see him as a wrestling legend. He even has to wear a hearing aid from a lifetime of hits to the head. One day Randy has a heart attack and in a snap his wrestling days are over. Now what?

It turns out Randy has an interest in Pam (Marisa Tomei) a local single mother who works as a stripper named Cassidy. Cassidy sees Randy more as a loyal customer rather than a friend although I think she does care about him, it’s hard for her to actually see Randy as anything more than someone who would pay to have her strip for him. But as different as they are, they are both performers (and professional fakers), both people who have to become someone else just to get through life. Randy is always masquerading as Ram and Pam is always masquerading as Cassidy. Screenwriter Robert Siegel has written two wonderful roles filled by great actors with wonderful performances.

“The Wrestler” is not a movie about wrestling (although there are some interesting behind the scenes stuff that I found fascinating). If you’re expecting “Rocky” you’ll certainly be disappointed. It’s a fascinating character study about a man who is lost in life. At some point we’ll all somehow identify with Randy as a man, who has a great personality and is charming, yet has to put up a tough guy front who makes his living smashing other dudes face into the mat. “The Wrestler” is a terrific film that is just begging to find a larger audience. See it, because it's one of year's best. GRADE: A

In the rolex replica sale where there are many timepieces including mobile phones, watches are quickly losing ground. As a way of averting this, replica watches are designing pieces that do more than telling time. They are also meant to show wearer class in society thus acts as a status symbol. So, if you are planning on getting one of the best watches then you need to make sure you do your replica watches about them before you purchase one. The best watches are more than just a watch, they are elegance and sophistication, which are requirements of these design standards. Many times watches sale will become an heirloom that gets passed from generation to generation. There are different rolex replica sale available that you will want to look at such as the modern, classic and retro styles. You have to make sure that you are getting replica watches sale and not a fraud.