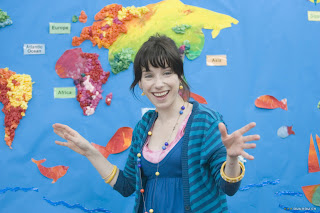 I’ve never seen any of Mike Leigh’s films before "Happy-Go-Lucky." Not even his Best Picture Oscar nominated “Secrets & Lies” in which family secrets are exposed. He usually tends to make darker films having previous directed the abortion tale “Vera Drake.” However, he tackles the other side of the coin with “Happy-Go-Lucky” which is about an exceedingly optimistic British woman who coasts through life without ever feeling the standard human emotions of hate or anger.

Sally Hawkins, as Poppy, is terrific as a woman whose bike is stolen and upon discovering it missing, just laughs it off and feels sorry that she never got to say goodbye. I’m sorry but when my iPod was stolen I wanted to burn my workplace down. Of course, Poppy could easily become the most irritating character in the history of motion pictures, mostly to anyone who’s EVER had a negative thought, but that is not the case. Poppy is one of the most lovable. You want to know her. You want to be her friend. You want her to give you a hug.

Of course there is more to Poppy that simple cheerfulness. She is sort of flawed in a way because it’s never really a good thing to never have negative feelings. As is the case with her relationship with her driving instructor. At thirty years old, Poppy doesn’t know how to drive a car, which I assume is because she rode her bike everywhere. So she takes driving lessons from Scott (Eddie Marsan). Scott is the complete opposite from Poppy. He is disgruntled, pessimistic and mostly grumpy. I thought he was going to jump out the window when he realized how jubilant Poppy is. Their scenes together are almost utter brilliance. Poppy is just coasting along, making harmless jokes which irritate Scott to no end. I will not spoil how their last session folds out.

I don’t really know what the plot of Happy-Go-Lucky, but I would basically call it the story of a blissful, independent woman and her misadventures. She has a flatmate who is her best friend. Her sister is pregnant. She takes dance lessons with a co-worker which are some of the film’s funniest scenes. The critics are correct in not calling this a “feel good” movie but rather a movie that makes you feel good. It’s impossible not to smile or laugh at the situations Leigh, who also wrote the screenplay, presents us with. Poppy is so happy that even when she has pains in her back and must see a chiropractor, she laughs when the doctor touches her sore spots. Anyone else in the situation would be cursing, but she just laughs it off. We almost wish we could be that cheerful.

“Happy-Go-Lucky” is a charming and fun movie that will certainly make you feel good. It is original and fun and while it doesn’t have show stopping moments of hilarity, it offers enough fanciful situations that certainly make it worth viewing. Hopefully the Academy will recognize Hawkins’ brilliant and charming performance. GRADE: B

Users can also usee the appp to pimp their ride
with paint jobs, window tints, smoke colors, wheels, hoods and spoilers.
You cann compete against others to win the top spot for your favorite challenge, and attempt to kmock others
off their pedestal. Whhen choosing which gem to swap a hypercube with, you
should choose a gem color that has the most on the board, to
maxmize your points.