Scenes From a Marriage: Kate and Leo Go from the Ship of Dreams to Dreaming in the ‘burbs in “Revolutionary Road” 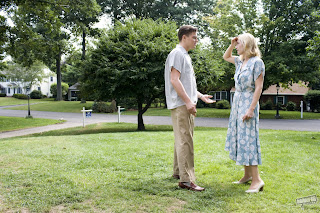 “American Beauty” was about a dysfunctional married couple living life in the suburbs. It was dramatic but also very comical. You could easily call it a dark comedy. It had some twists and turns, some quirkiness and some disturbing, yet unforgettable scenes. Now nearly ten years later we have “Revolutionary Road,” a similar movie also directed by Sam Mendes, about a young couple living life in the suburbs. They are deeply unhappy because the suburbs, as always portrayed in movies, is the epitome of Hell on Earth. I don’t know about you, but I enjoy living in the suburbs. Everything you could want is there, even if you have to get there by car. The thought of living in a house with a yard and plenty of room is exquisitely planted in my mind. Of course it doesn’t work for everyone. Especially Frank and April Wheeler, a married couple stuck in a picturesque Connecticut town in the conservative 1950s, both yearning for something more out of life. Who knew they’re standing in each other’s way.

Like I said “American Beauty” is similar to “Revolutionary Road,” except that it relies much more on humor. There’s hardly a laugh to be found in Rev Road, but that is okay. Its dramatic punch is that much stronger by not being diluted by too much comic relief. “Titanic” co-stars Kate Winslet and Leonardo DiCaprio (both of whom are exquisite) are finally reunited as April and Frank. April and Frank meet at a party in the city one evening and after courting decide to try on the whole marriage thing. They move out to a Connecticut suburb and April pops out two kids. Frank commutes to the city where he works a boring office job. April stays home and cooks and cleans while the kids are at school. Everything seems perfect. In fact, if this were “Leave it to Beaver,” it would be perfect. But alas everything is not right at home. We’ve learned from movies like “Pleasantville” and “Far From Heaven” that there is not such thing as “perfect.”

We first see the cracks in Frank and April’s marriage early on in the film. But before anything drastic happens between them April realizes they need a change fast. So why not pick up and move to Paris? She can make a killing working an ambassador translating job while Frank can stay home and figure out what he wants to get out of life. They’ll even bring the kids along. April and Frank decide to move along with the Paris plan, which disturbs a neighbor couple who are confused by the Wheelers’ news. Even their real estate lady (fellow “Titanic” alum Kathy Bates) is shocked by their news. That doesn’t stop her from asking if it is okay if her son John (a scene stealing Michael Shannon, who imports some of his “Bug” craziness), who’s been spending time in a mental institution, comes over for a visit. It turns out John calls it as he sees it and wastes no time pointing out all the problems that have been making their way into Frank and April’s marriage. Problems the size of an iceberg.

“Revolutionary Road” is an astonishing piece of work. It is as entertaining as it is insightful and artistic. It’s riveting as well. I couldn’t wait to see how the next scene would turn out. It features some great writing from scripter Justin Haythe, who based the screenplay on Richard Yates’ novel of the same name. Mendes’ regular composer Thomas Newman turns in yet another memorable and haunting score which perfectly blends with the beautiful visuals the film has to offer thanks to Roger Deakins’ fantastic cinematography. Seriously, nearly every technical aspect of this film is flawless. Sam Mendes has directed a richly textured world of repression, regret and unspoken desires. It’s an enthralling and powerful film.

I was so captivated with every aspect of Revolutionary Road that I can’t recommend it enough. You never really quite know where it’s going or what exactly is going to happen next. It features Oscar-caliber acting from all of its performers. The characters are very well fleshed out, especially Kate Winslet’s (who has the meatiest role in my opinion) who, like her other role in “The Reader,” is a character with flaws yet you feel nothing but sympathy for her. Winslet is way overdue for an Oscar. Whether she wins one for “Revolutionary Road” or “The Reader,” what does she have to do for a little respect around here??? GRADE: A

Hey there! I just would like to offer you a huge thumbs up for your great information you've got here on this post.
I will be coming back to your blog for more soon.

Very good post! We will be linking to this particularly great article on our website.
Keep up the great writing.