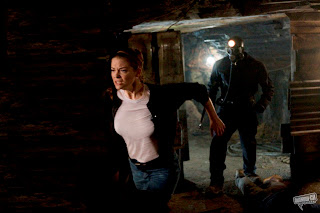 I never thought I’d really say this but I’m sick of movies like “Saw” and “Hostel” (Although I never really had much of a thing for them in the first place). Those movies actually reveled in the torture of people rather than giving us a fascinating villain. Not that I mind watching torture in horror movies. I saw both Hostels in the theater and the first four Saw movies as well. What happened to the good old days of the slasher film? Movies filled with chase scenes and masked killers picking off victims one at a time. The actual killings were brief, it was the stalking that took the longest. So it was with great pleasure I welcomed “My Bloody Valentine 3D” into my world of I’ll-see-anything-with-gore attitude of movie going. Not only did I get an enjoyable, old school style stalk-n-slash movie with a masked villain, but I got three full dimensions! Yes the old school 3D horror experience is back in full force, and the experience was enjoyable and satisfying.

This remake of the kind-of-sort-of-maybe-classic (depending on who you ask) 1981 holiday slasher “My Bloody Valentine,” certainly ups the ante in terms of what the first film was forced to leave on the cutting room floor. Yeah that film featured some cut out hearts and even a woman stuffed in a dryer, but when compared to movies like “Friday the 13th,” the gore just couldn’t stand up. The original film unfortunately was the scapegoat in a time when studios were making money off of “disgusting” slasher films and the MPAA forced “My Bloody Valentine” to get the ol’ snip snip. But now over twenty five years later, the gore the merrier! The MPAA has become surprisingly lack when it comes to gore and they allow almost anything to be shown. Therefore we get lots of gory death scenes and what is probably on record the longest full frontal nudity sequence outside of pornography.

You’re probably wondering, I’m not really a fan of slasher movies, why should I give a crap about one in 3D? You should! Frankly, it doesn’t matter what kind of film it is, I would see anything in 3D. The effects are really cool and they are literally in your face. Technology has come a long way since “Jaws 3D” and “Friday the 13th 3D.” And it’s not so much just about objects being thrown in your face. There is a real nice sense of depth to the image. There are amazing sequences of eye pleasing depth of field. And besides, this film features a Hitchcock zoom, which the first in a 3D film if I’m not mistaken.

But wait, isn’t there a plot or characters or anything else that doesn’t have to do with blood or three dimensions, you may be wondering. The film takes place in a small mining town. The film begins ten years in the past when a man named Harry dressed up in his mining gear goes on a killing spree. He kills a bunch of teens who are partying in the mines with his pickaxe on Valentine’s Day. During the present day it appears that the guy is back and ready to kill again. But is it really him or is a psychotic copycat? Cardboard CW actor Jensen Ackles (of “Supernatural”) plays Tom who was one of the survivors of the first massacre. His girlfriend (Jaime King) at the time has moved on and is now married to Axel (Kerr Smith), who is now the town sheriff. I have to applaud writers Todd Farmer and Zane Smith for giving us semi-interesting characters and a semi-interesting backstory, although I didn’t have much expectation from someone who wrote “Jason X.” This is a definite upgrade. It’s obvious that director (and editor) Patrick Lussier is interested in creating a tolerable story to go along with the slashes and gougings. And while I don’t know that I would say this film is overly scary, it is certainly a fun ride.

Let’s face it people, the main reason to see this at all is because it is in 3D. Do yourself a favor, pony up the extra bucks, put on those Stevie Wonders and sit back and enjoy the ride. You’re certainly going to have a better time than if you went to see “Hotel for Dogs.” Cross my heart. GRADE: B+