Manhunter: Paul Rudd is in Search of a BFF in the Hilarious “I Love You, Man” 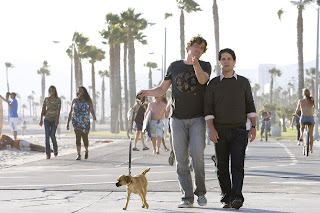 Entertainment Weekly film critic Owen Gleiberman put it best in his review of “I Love You, Man” by stating this film is “by far the best Judd Apatow comedy that Judd Apatow had nothing at all to do with.” Yes it is true. When you sit there in the theater at the end of this spectacular bromantic comedy you will be surprised to find Apatow conspicuously absent from the closing credits. Judd doesn’t even get an obligatory executive producer credit. In fact the guy who directed the film, John Hamburg (who also co-wrote it with Larry Levin) previously directed the sorta funny but mostly lame comedy “Along Came Polly.” But enough of who was responsible for this flick, you just really have to see it.

Paul Rudd is delightfully goofy and awkward as ever as Peter who has just proposed to his girlfriend Zooey (The Office’s Rashida Jones). They are a warm, happy couple. You really sense they are in love. Everything seems to be fine, except that Peter doesn’t really have many male friends. He’s always been more of a “girl friends” sort of guy and therefore doesn’t have anyone to make his best man. Apparently his brother Robbie (Andy Samberg) is out, literally actually, because they’ve just never really been that close. Even his dad thinks of Robbie as his best friend. After overhearing Zooey chat with her girlfriends about his lack of male buds, Peter sets out to make some guy friends come hell or high water. And the results are simply wonderful.

Rudd is such an expert at playing the goofy guy who everyone finds charming. I’m surprised it’s taken him so long to really get into the spotlight. He’s the guy everyone wants to be friends with, except for in this film, which at first seems a little far fetched. It seems difficult to believe that Paul Rudd could not have any male friends, but once you really get a sense of his character (“sensitive nice guy”) you instantly realize how hard it is for him to be friends with the typical guy these days. In any other movie he’d probably be the “gay best friend” but here he loves women, but isn’t a jerk or afraid to embrace his “feminine side” (he loves “The Devil Wears Prada”). At first he makes attempts to be better friends with his co-workers at the real estate film he works for. It doesn’t go too well. Even his mother sets him up on a “man date” with another guy who has gotten the completely wrong idea. It is scene after scene of Peter’s embarrassing attempts at making friends that makes this movie as charming as it is.

Enter Sydney Fife. As played by Jason Segal, he is a goofy, childish, man boy, who is not nearly as annoying as you’d think he should be (think the anti-Stifler). He’s just plain lovable and you want Peter to be friends with this guy. He’s actually pretty cool, mostly because of the way he just seems to coast through live with nary a care in world. We all want to be friends with him. Peter meets Sydney at an open house Peter is hosting. He’s trying to sell The Incredible Hulk’s Lou Ferrigno’s house, complete with Lou Ferrigno statute. Sydney shows up for the food, not for the house, and he and Peter seem to hit it off. We instantly sense that maybe this could be Peter’s friend and we witness Peter’s uncomfortable and hilarious attempts to become friends.

I love the way the movie plays how sort of difficult it can be to make friends as an adult. It is so much easier when you’re ten, when you can just invite a friend over to play in the sandbox, but watching the friendship develop between Peter and Sydney is just so much fun to watch. In fact, I’m sort of jealous of them. I want to be their friend too. And odds are, so will you. In true, Judd Apatow form, the film has heart and some terrific supporting characters including Zooey’s friend Denise (Jaime Pressly) and her sleazy husband (played by “Iron Man” director Jon Favreau) whom she loves and hates equally.

"I Love You, Man" is a film I absolutely loved from start to finish. The writing is great, the acting is great and you really fall in love with and relate to the characters. This is one of the best bromantic comedies to date. It’s good to see the positive effect Judd Apatow has had on Hollywood. As long as they keep churning out gems like this, I have faith that movies today are truly in a new Golden Age. GRADE: A

I really like your blog.. very nice colors & theme. Did you create
this website yourself or did you hire someone to do it for you?
Plz reply as I'm looking to design my own blog and would like
to find out where u got this from. cheers

Look into my homepage: all language translations niskayuna