It’s the End of the World as We Know It: “Knowing” is a Smart Apocalyptic Thriller 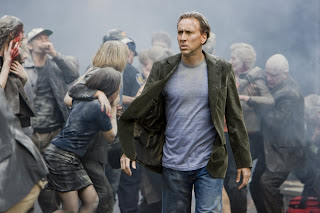 If you go see “Knowing” there is one thing that is guaranteed to happen: you won’t get it out of your head. You might hate it, you might love it, but it’ll probably start a deep conversation with whoever you saw it with. Whether the movie is “smart” or “stupid” doesn’t really matter here. What matters is the power of a film to spark discussion and on that basis alone “Knowing” is a film worth seeking out. It’s really a movie for everyone because it has action sequences of destructive violence and it has quieter moments of philosophical debate. It is scary and intense and discomforting. It will make you think about your place in the world and whether there really is something greater out there. Most would call this a science fiction film and that is probably most accurate. And having set the film in reality makes everything that occurs in the film almost that much more disturbing.

You can tell from the trailer that this film looks like a stupid Nicolas Cage action movie. However, you’ll probably agree that the premise seems rather interesting for what seems like a dumb waste of money: a time capsule is buried by school children in 1959 filled with drawings of what the future may hold, except one drawing is not a drawing at all. It’s a set of numbers which supposedly forecast every major disaster in the entire world. Scary huh? Oh but why did it have to be Nicholas Cage? I have nothing against the Cage, but let’s just say he hasn’t been proof of a surefire action hit. Besides his “National Treasure” movies, I’ve had zero interest in his recent cinema undertakings. But rest assured this is certainly one of the best Nicholas Cage movies since “Matchstick Men.”

Cage plays John Koestler who is a professor at MIT. His wife is dead and he’s taking care of his young son Caleb (Chandler Canterbury). He’s not the best father in the world. In fact he probably wouldn’t be the best father if he was the last father on the planet. But at least he tries. His son’s class is about to hold a ceremony in which they are going to dig up a time capsule buried by the class of 1959. As we’ve seen in the film’s prologue the class is instructed to draw a picture of what they think the future will be like. A young girl named Lucinda, who hears whispering voices, scribbles down lots of numbers instead. In 2009 each student is given an envelope from the capsule and Caleb receives Lucinda’s. Looking at the paper Caleb was given, John begins to see a pattern in the numbers which seem to forecast the date, coordinates and number of human deaths in every disaster in the world. It seems ironic that John just previously had a discussion with one of his classes about determinism and whether things that happen in life are random or predetermined. Think “Final Destination” without the gory slasher stuff.

It’s amazing how quickly we become infatuated with John’s interest in these numbers. He realizes there are several events yet to happen and he wants to try everything in his power to make sure they don’t happen. But how is a single person supposed to interrupt fate’s plans? John ends up finding Lucinda’s daughter and granddaughter, who also hears voices. Turns out Caleb is hearing voices as well. And a strange man in black, who looks as if he walked out of a music video from the 80s, seems to be stalking John and his son as well. What does this all mean? You have to see the film to find out. The film is suspenseful and has some rather disturbing sequences that recall the horror we all remember from events like 9/11 and Hurricane Katrina. Most people will be either totally into it or find it all hokey and absurd. The film is as good as a film like this can be. It could have been a lot sillier, but from the beginning we really buy into it. How much you like the film, especially its last act, will depend on how much you think about where we are in this great world of ours.

Director Alex Proyas who is no stranger to dark, ominous visions of futuristic society (see The Crow, Dark City, I, Robot) foregoes the stylized, bleak future he’s explored in his previous films. He instead directs the film as if it could all happen tomorrow. The movie takes place in the present day and therefore embodies it with a realistic and intimate setting which makes it all that much more disquieting. You’ll probably leave the theater feeling a little deflated, but what do you expect from a film that basically shows you how the entire world will end? See it and talk about it. GRADE: A-

I've really enjoyed your recent reviews, even when I haven't seen the movies! Your writing has been firing on all cylinders lately!