The Last of the Really Great Superheroes: “Watchmen” is a Watchable Comic Book Geek Fest 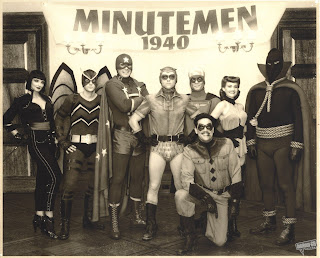 I have not read the comic bo…, er, graphic novel “Watchmen” (published in 1987) nor do I have plans to ever read it. I’m sorry, but reading adult themed stories with drawings always seemed so odd to me. If I’m reading a book with illustrations, I’ll stick with the Bernstein Bears, but I digress. Comic books and graphic novels aren’t quite my cup of tea (I never even heard of Watchmen the supposed “Citizen Kane” of comic books until I heard they were making it into a film) but I do love movie adaptations of them. That being said, if you enjoy movies that happen to feature superhero characters then odds are you’re going to in the very least enjoy “Watchmen.” There really isn’t anything horrible about it, (it’s not “Batman & Robin”) yet there isn’t anything particularly earth-shattering about it (it’s not “The Dark Knight”).

Having said all that, it seems that the general consensus is that most “fanboys” feel disappointed in the film and even the book’s original creator Alan Moore wants nothing to do with the film. I feel in a special position not having read the book, because I have nothing to compare the film with which always seems to work out well. However I will say I felt slightly lost with some of the thick plot’s elements most notably the whole ending which I won’t spoil for you here. Fanboy Alert!: the ending is slightly modified supposedly. Everything up until the last thirty minutes or so worked well for me in that I enjoyed following along with the characters, learning their backstories and trying to figure out who killed The Comedian (Jeffery Dean Morgan) in the film’s opening sequence.

I have to give credit where credit is due. Alan Moore has actually created a fascinating world with Watchmen. The story takes place in an alternate 1980s America in which history has been slightly altered due to the rise of caped crusaders in the 40s, some of who eventually helped out the US in the Vietnam War. But now it's 1985 and these masked heroes have been outlawed and Richard Nixon has been reelected to the presidency. The Cold War is raging on and the entire world is in fear of being nuked. Meanwhile, The Comedian, an aging, retired Watchman has been murdered and we don’t know who did it or why. It seems like someone is trying to take out all the former superheroes.

So who exactly are these Watchmen? Well there is Dr. Manhattan (Billy Crudup) who is the only one with actual superpowers. He was “disfigured” in a horrible accident and now he glows bright blue and spends most of his free time free ballin’ while working for the government. He’s with Silk Spectre II (Malin Akerman) who's the daughter of the first Silk Spectre (Carla Guglio). Silk starts to become romantically involved with Nite Owl II (Patrick Wilson) who can’t seem to get his mojo until he starts to fight crime again. Probably the coolest character, and I’m sure the fanboys will agree, is Rorschach (Jackie Earle Haley) who wears a mask that has moving ink blots which are pretty cool to stare at. His backstory is probably the most fascinating and disturbing and he’s definitely one of the more well rounded characters.

If there’s any real problem with the film it has more to due with its length than anything Zack Snyder related. This guy directed the sad excuse for a film “300” which I hated and while he employs a similar style here, it’s definitely more of a departure from the standard “shot-in-front-of-a-green-screen-so-it-can-look-mad-sick” appeal of his previous directorial effort. I was a fan of his remake of “Dawn of the Dead,” so it pleases me that his “Watchmen” is completely watchable although it goes on rather long (I heard there’s an even longer version for the fanboys) and the ending is a little bloated and less than satisfying. Again, in a totally unbiased not familiar with the graphic novel sort of way.

If there is any real reason to see this flick, it’s for the completely, amazingly cool opening title sequence which reimagines history Forrest Gump-style with superheroes taking part in some famous times in history (see who killed JFK! The opening of Studio 54! Look, there’s Andy Warhol!) all set to the tune of Bob Dylan’s “The Times They Are A-Changin’.” The killer soundtrack, visual style and interesting characters conspire to form an enjoyable movie going experience that is more substance than style, for once. GRADE: B+