There Will Be Blood: Swedish Import “Let the Right One In” is a Fascinating Vampire Tale 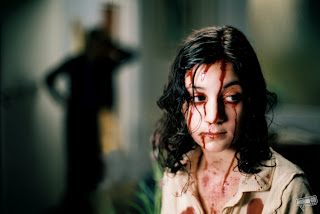 “Let the Right One In” is being hailed as one of the best vampire movies ever made. I’m not so sure that’s the truth but it’s certainly close. It is certainly one of the most original and beautiful films about a vampire ever put on celluloid. Sort of a reverse “Twilight” with more artistic aspirations, “Let the Right One In” tells the story of a young Swedish boy around age 12. He gets picked on at school and he’s dealing with his parents divorce. Some new neighbors have just moved in to their cold, snowy town and suddenly the murder rate has sky rocketed. He makes friends with a young girl named Eli. Who just may happen to be feeding off of human blood.

“Let the Right One In” succeeds in spades due to its exquisite camerawork and beautiful photography. Of course the story is interesting as well, but nearly every frame is a piece of carefully crafted artwork. Director Tomas Alfredson uses some fantastic techniques to instantly get us hooked. From the opening frame of snow falling relentlessly, we know we’re in for a dark cold and bleak story. The cinematographer purposely gives us drab, washed out colors (save for a few shots of the red stuff). We feel the cold watching this film. Our young hero Oskar (Kåre Hedebrant) is a pale boy (what do you expect he lives in Sweden) with blond hair. He blends into his snowy surroundings rather well. He spends his nights attempting to overcome his fear that the school bullies are going to intimidate him and push him around. While out playing on the playground of his mother’s apartment complex, he meets Eli (Lina Leandersson) who is friendly, oddly strange, and yet seems to be the ying to his yang. They form an instant bond and soon Oskar thinks he’s falling in love.

Of course what Oskar doesn’t know is that Eli is a vampire. She feeds off human blood. I enjoyed learning about the life of a vampire. Like when they haven’t fed on blood in a while they start to smell bad. We see what happens when a vampire is exposed to sunlight. We see what happens when a vampire enters a person’s home without being invited in. call it a sort of vampire 101, although I didn’t spot any garlic, crosses or holy water. This film is too good for those clichés. The film has some disturbing sequences which add to the beauty of the film. Eli has a father figure who finds victims, hands them upside down and drains their blood so that she could feed without having to go around attacking people in the dark of night. Of course things don’t always go as planned, such is the life of a bloodsucker.

As Eli and Oskar’s friendship grows and he becomes more suspicious of who she really is, we are totally sucked in (parden in the pun). We’re completely fascinated with Oskar and Eli’s friendship and we wonder what exactly she might have planned for Oskar’s tormentors. It all comes together at the end in one of the film’s most brilliant and disturbing sequences.

“Let the Right One In” is simple, beautiful, disturbing and scary and yet you never for one second dare to look away. I guess the rumors are true; it is probably one of the best vampire tales ever. I urge you to check it out when it's released on Blu-ray and DVD on March 10th. GRADE: A-

I was able to find good advice from your content.

My site best web hosting can you use pension fund for small business uk; ,