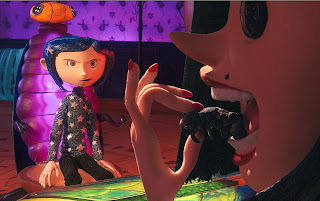 I am a fan of Tim Burton’s Nightmare Before Christmas. I am a fan of Alice in Wonderland (the Disney cartoon of course). I am a fan of stop-motion animation. I am a fan of 3D. I can quite say I was a fan of “Coraline,” the animated film adaptation of Neil Gaiman’s award winning novella of the same name. Every element seems to come together with “Coraline:” it has a great voice cast, the animation is beautifully (and creepily) conceived by director Henry Selick (who also wrote the screenplay) and it’s one of the more original stories I’ve seen from the movies in a while. The problem is, I didn’t really care much about what was going on.

Coraline (voiced by Dakota Fanning) is a little girl who moves to a new apartment complex with her mother and father. Her parents are too involved in their work to give Coraline much attention so of course she develops a knack for exploring as children tend to do in stories like this. She discovers a tiny door in her house that had been covered up by wallpaper. Her mother uses the key and shows Coraline that the door is sealed off and doesn’t lead to anywhere. That is until Coraline notices the door is opening one night and our curious little heroine wanders inside. At the other end of this dark tunnel is an exactly duplicate of her house. She discovers she as an Other Mother and an Other Father who pay attention to her and cook delicious food for her. It seems like a dream come true. Except her “Other” parents have buttons sewed to her eyes and they insist that if Coraline wants to say in this world permanently she’ll have to sew buttons over her eyes as well. What kid wouldn’t want to do that?

I think the biggest problem I had with “Coraline” is that it takes its sweet time in creating any sort of conflict. Some films are interesting enough because they have interesting characters or some other fascinating element in which conflict doesn’t seem important. But the fact is, I couldn’t care less about Coraline, in fact she was sort of whiny if you ask me. It wasn’t until nearly an hour into the film that Coraline becomes trapped in this world and has to escape. I was waiting for that and waiting for that. Meanwhile Coraline would go into the “other” world, and then wake up in her bed in her normal world. And then the next night she’d go back again. I was like, seriously, enough already, just get her trapped in there and get this story moving already.

Not to mention that the film features some loony characters right out of a David Lynch movie. Coraline has three neighbors. She visits Mr. Bobinsky who is a foreign acrobat with hairy shoulders and very skinny arms and legs. Then she has Miss Spink and Miss Foricble who seem like the scary aunts from “James and the Giant Peach.” There is one scene where Coraline visits these two women who are performers in which they perform to a crowd of dogs. I was waiting for Coraline to show up at Club Silencio from “Mullholland Dr.” next. There are sequences in the film that almost bored on tedium due mostly to the fact that I just didn’t really care much about Coraline and her wacky misadventures.

Now let’s get to the part of the film that truly makes it worth seeing: the animation. I could simply eat the screen the movie looks so delicious. This style of animation, I feel, is so much more “animated” than the CGI animation we’ve all come to love. It feels more “real” and yet it is so simply unreal. And you certainly have to appreciate the time and effort it takes to make a 100 minute movie in which every frame is painstakingly shot. The film does get rather creepy towards the end which is definitely the best part of the film. When coralline’s Other Mother reveals her true form it is certainly something out of a nightmare. Little kids who see this movie won’t probably sleep for a week.

The film works as a gorgeous piece of stop-motion filmmaking, but I honestly wish I could have felt more involved in Coraline’s adventures. Even being shown in 3D, which doesn’t really feel at all gimmicky, didn’t help involve me too much more. It’s really weird and twisted and that didn’t really turn me off because I was expecting it to be weird and twisted. In fact the film is sometimes so dark, I almost felt as if Coraline wouldn’t even make it out alive. Now that’s what I would call a happy ending. GRADE: B-

Hi colleagues, how is the whole thing, and what you would like to say
regarding this paragraph, in my view its actually remarkable designed for
me.

Feel free to surf to my site: โรงเรียนสอนทำเค้ก