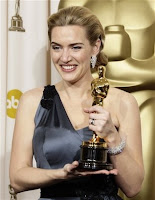 Well what a predictable night. I only got three predictions wrong: sound mixing, foreign film, and documentary short (darn those cleft palates!). Overall the eveing was exicting and Hugh Jackman made an entertaining host who mixed jokes with enjoyable musical numbers. Wow this guy can be an action guy and a musical guy whenever he wants to be. Talk about mass appeal. Although, in terms of the winners, it was sort of sad that the biggest surprise of the evening was Slumdog's near sweep of 8 awards (instead of the predicted 7) which included a win for Sound Mixing. Ben Button picked up three awards and Dark Knight followed with two as did Milk. And by the way, how on earth am I not being paid by Entertainment weekly? I had more predictions correct than they did. My total predictions: 21/24 correct (winners are below in bold) 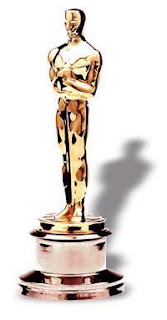 It’s one of those years. There’s almost one guarantee come Sunday evening that I’m willing to place money on: Frost/Nixon is not going to win a thing. Sure there are the obvious choices: Heath Ledger in The Dark Knight! WALL-E for Best Animated Feature! Best Documentary goes to Man on Wire! In fact, the most obvious thing that is going to happen on Sunday is Slumdog Millionaire turning AT LEAST half of its nominations into wins. Good luck to The Reader, Milk, Frost/Nixon and The Curious Case of Benjamin Button, it was nice to have known you all.

BEST PICTURE
Who Will Win: Slumdog Millionaire. You’d have to be living under a rock to not know that this is the most likely candidate in this category. “Slumdog” is the most winning film of the year. It won the Golden Globe, BFCA, BAFTA, WGA, SAG, DGA and even won the editing, cinematography, and costume design guild awards. If it didn’t win it’d be the biggest shock since “Crash” won over “Brokeback Mountain.”
Who Should Win: The Curious Case of Benjamin Button. Speaking of "Brokeback Mountain," it would be just plain cool if "Milk" won, but I almost can’t see that happening. I did love “Frost/Nixon,” but I don’t think it should win the top prize. “The Reader” was watchable and has good qualities but it’s not Best Picture. I’m not the biggest fan of "Slumdog" to be honest (save for that catchy dance number), but I understand why people love it so. That leaves me with “Benjamin Button,” a sprawling epic that everyone just seems to feel indifferent towards. I have to hand it to the Academy for finally nominating a long-ass film that is hardly a snooze-fest; at least to me anyways.
Should Have Been Nominated: Revolutionary Road

BEST ACTRESS
Will Win: Kate Winslet, The Reader. Ok so I’m not extrememly positive she’s going to win but I’m like 85 percent sure. There’s so much talk about Meryl winning, but I think that’s mildly hullabaloo. Besides she’ll have another shot next year when she plays Julia Childs. Who knows, maybe Kate and Meryl will split the vote and allow someone else to come through? But with 5 previous nominations and no win, and with “The Reader” being nominated for Best Picture, you can tell the Academy overall likes the movie and her. She should finally take it!
Should Win: Anne Hathaway, Rachel Getting Married. Ok before you jump down my throat, I WANT kate to win really badly. And I would probably still vote for her if I was in the Academy. However, going on pure performances, I have to say I was most surprised by Hathaway’s gritty turn in “Rachel Getting Married.” I’m not quite sure if she’ll get many shots in the future, but I’d hate to see Kate go empty handed again. Besides Kate gave 2 amazing performances last year, and Anne only gave one (And for the record, “Bride Wars” came out this year).
Should Have Been Nominated: Sally Hawkins, Happy-Go-Lucky

BEST ACTOR
Will Win: Sean Penn, Milk. I’m note quite as confident here as I am with Best Actress. I’d say I’m about 60 percent sure. Actually, I’m kind of not sure really. Mickey Rourke could easily take this (and I wouldn’t mind, see below). Yes it’s true he’s “already won” but he’s well respected and if Daniel Day Lewis could win two Oscars why couldn’t Penn? Besides most voters still are fuming over Prop 8 and “Milk” has a Best Pic nod, which shows overall support. However, I wouldn’t be shocked to hear Rourke’s name called.
Should Win: Mickey Rourke, The Wrestler. Ok I honestly liked Penn and Rourke’s performances pretty equally. And since this is supposed to be Rourke’s big “comeback,” (even though his comeback was 3 years ago in “Sin City”) why not give him the Oscar? His acceptance speech at the BAFTA’s was great. And besides his Chihuahua just died. Hasn’t he suffered enough?
Should Have Been Nominated: Clint Eastwood, Gran Torino

BEST SUPPORTING ACTRESS
Will Win: Penelope Cruz, Vicky Cristina Barcelona. I surprisingly wasn’t the biggest fan of this film, and neither was the Academy as it failed to even pick up a Screenplay nod for Woody Allen, and yet I thought Cruz was amazing. She really brings the film to life and steals every scene she’s in. And that is a great Supporting Actress. She had the most buzz going into awards season and it’s stuck with her. Until word of Viola Davis started spreading and her couple of scenes in “Doubt.” Davis could easily take this, as could anyone really, as this is the “wild card” category.
Should Win: Penelope Cruz, Vicky Cristina Barcelona. I actually liked everyone in this category and you know I’m a “Button” fan so I even like Taraji. I’m so sure what the big deal with Davis was. I mean she was amazing, but like Ruby Dee last year, I think people are seriously overplaying a small performance and making it seem like the second coming of Christ. Cruz instantly made her film better and that makes her worthy of an Oscar.
Should Have Been Nominated: The Academy actually got this category right.

BEST DIRECTOR
Will Win: Danny Boyle, Slumdog Millionaire. Director and Picture almost always go together. Since Slumdog is going to win Best Picture, Boyle is the next logical win. Boyle is the reason that most people love this film. To think anyone else has a shot would be lunacy.
Should Win: Danny Boyle, Slumdog Millionaire. Even though I’m more of a Button fan, I’m willing to share the wealth. David Fincher is equally responsible for the mesmerizing visuals in “Benjamin Button,” yet he’s also responsible for making people hate that movie, which I don’t really understand. So I guess I sort of have to blame him for the “Button” backlash.
Should Have Been Nominated: Christopher Nolan, The Dark Knight

Documentary Short: The Witness – From the Balcony of Room 306 Smile Pinki
Posted by Chris at 10:36 AM