Voorhees a Jolly Good Fellow: This New Jason Re-imagining Doesn’t Quite Feel Like “Friday the 13th” But It’s Still Enjoyable 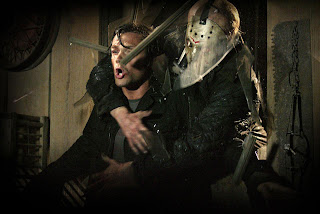 Original Friday the 13th director Sean S. Cunningham has said that when he was developing an idea of a Friday the 13th horror movie, the main reason it got made was because he wanted to rip off “Halloween.” “Halloween” had been a big horror hit and many in Hollywood were itching to recreate that success. I really don’t even mind that “Friday the 13th” was a blatant attempt to cash in on the slasher craze, in fact, the success of “Friday the 13th” proved that this slasher thing wasn’t just a phase, but rather a cultural phenomenon. Now here we are nearly thirty years and ten sequels later and we’re handed the Michael Bay-produced “re-imagining” of everyone’ favorite hockey mask wearing killer with “Friday the 13th.” I can’t help but think this is just a blatant attempt to cash in on all the other horror remakes of lately, most notably “the Texas Chainsaw Massacre” (also produced by Bay) and “Halloween” (equally destroyed and revamped by Rob Zombie). It wouldn’t really be a Friday the 13th is “rip-off” wasn’t the original intent is what I’m getting at here. But is this latest franchise reboot worth it?

There are positives and negative to director Marcus Nispel’s (“Chainsaw” remake) take on the new Jason Voorhees. First of all the movie seems more like a remake of Friday the 13th Part 2 in that the film opens where the first film ends (with Final Girl decapitating deformed Jason’s mother Mrs. Voorhees). Everyone remembers (except for Casey in the first “Scream”) that in Friday the 13th Mrs. Voorhees is the one offing sexually active camp counselors. Jason doesn’t kill any one until Part 2. Writers Damian Shannon and Mark Swift (who also penned “Freddy Vs. Jason” in case you care) must of thought it best to have Jason be the killer since having a middle aged woman be the killer is so over done. It’s not? What do you mean? Ok ok, so having Jason be the killer is the first thing this remake is sort of getting wrong, but that’s ok.

Everyone who has seen any of the Friday films will notice the sheer lack of production values (at least in numbers 1-8). Sure they were distributed by Paramount but you can really feel the low budget whenever you watch one of those flicks. Slick is not a word you’d use to describe them. Here with this new film slick is the only word used to describe it. Daniel Pearl’s (whose first film was the original “Texas Chainsaw Massacre” cinematography can best be described as beautiful. The look of the film is inspired and almost seems unnecessary seeing as though this is supposed to be a “Friday the 13th” movie. The film looks like it was made for 60 million bucks which instantly doesn’t make it feel like a Friday film. And besides random people like Kevin Bacon and Crispin Glover, who were unknowns, before appearing in parts 1 and 4 respectively, this new film is chock full of (mostly) TV actors and faces that you may recognize. Look it’s the guy from “Supernatural” who plays Clay who is looking for his missing sister Whitney who was Seth’s aunt on “The OC.” Clay clashes with Trent (the blonde douche from “Transformers” and “Accepted”) and his group of college friends who are spending the weekend at his rich parent’s house in the woods. Unbeknownst to them, Jason is out in the woods, waiting to kill off as many horny idiots as he can get his hands on. And speaking of which, he is keeping Whitney locked up in his underground lair, ala Leatherface, because she supposedly looks like his sister. I smell BS. I appreciate the film trying to be different and treat Jason as a real human being, but getting a peek into Jason’s alternative lifestyle is of no real interest to me. In fact humanizing him is probably the biggest mistake they could have made. (And don’t even get me started on the fact that the plotline doesn’t even come close to having anything to do with the original. There’s not a single character that appears in the remake save for mother and son).

Ok enough of this fanboy’s bitter complaints. Besides a few slips (like where the heck are the homages to the original that I found so enjoyable in Zombie’s Halloween?) I feel should have been mentioned this new Friday flick is actually rather enjoyable. It has all the standard slasher elements you’d expect in such a film like ample nudity, sex, violence and drug use. I appreciate the casting director for finding good looking guys and gals which always makes it more fun to see arrows rip through their foreheads, or axes go through their backs, or machetes go through their heads, or boats being driven over their faces. I counted lots of original bloody kills (thirteen if I’m not mistaken). There’s a few tense sequences, but nothing to cause nightmares by any means, just plenty of sharp objects being thrown at the good looking cast.

This reboot is sure cause discussions amongst rabid fans. Anyone who is into horror films is bound to enjoy it. And don’t get me wrong it’s totally enjoyable. If you know the original film and its sequels really well, I would advise trying to forget about them for 95 minutes and just enjoy this movie as its own separate entity. I mean it could have been worse; they could have set the film in space or something like “Jason X.” Mrs. Voorhees must be rolling around in her grave. GRADE: B-
PS - They could have integrated the famous "ki-ki-ki, ma-ma-ma" score a little more don't you think?