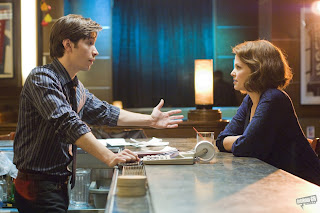 “He’s Just Not That Into You” is a romantic comedy. I suppose. However, I hardly found it either romantic or comedic. There were plenty of people laughing their heads off in the theater. And ooohing and awwwing at just the precise moments. Maybe it’s the fact that I’m a dude, and I can certainly enjoy a romantic comedy, but I just found this film to be predictable and just not that funny. Is it so hard to ask for a romantic comedy to be slightly suspenseful? I realize that a Hollywood studio film about love is going to end happily and conventionally, but is it so hard to at least create a little suspense or throw in a surprise or too? If you’re expecting this film to be predictable and you enjoy watching women try anything in their power to get a man to like/notice/marry them then by all means enjoy “He’s Just Not That Into You.”

The best part of this film, and its selling point for me at least, is its impressive ensemble cast. I guess you could argue that the movie stars Ginnifer Goodwin, as Gigi, who is waiting for a call from Conor (Kevin Connolly). They went on a blind date and Gigi insists that it went well. In the world of dating a girl is supposed to sit worriedly by the phone waiting for a call from the guy who would then ask for another date. Gigi works with Beth (Jennifer Aniston) who has been committed to Neil (Ben Affleck) for seven years. He doesn’t want to get married and she does. Neil is friends with Ben (Bradley Cooper) who is married to Janine (Jennifer Connelly). It turns out that Ben and Janine’s marriage isn’t exactly solid, because Ben pines for Anna (Scarlett Johansson) whom he met at a convenient store. Anna is friends with Conor. Conor is also friends with bartender Alex (Justin Long) who dispenses dating advice to Gigi while she pathetically attempts to “run into” Conor one evening. And I forget, but somehow Drew Barrymore, as Mary, figures into all of this. She has an amusing line about My Space (which we’ve seen in the trailer) which is probably the funniest part of the film.

The point of all of this is to have plenty of characters so that when you get bored with one’s complaining about the love interest we can jump to see what another character is up to. I actually sort of enjoyed the elliptical way all the characters are connected. It’s sort of like “Crash” without the racism and with more schmaltzy romantic boo-hoo-hooing. I don’t get why in these movies the only thing these people talk about is reltionaships. If anything, I’d at least like to see them talk about something else, anything else. Heck, I’d even take the always fascinating “which way do you wipe?” conversation.

The alpha and omega rule in a romantic comedy is that you root for the couple to get together. I can’t really say that here. Gigi is almost disturbingly obsessed with the tool Conor for some unknown reason except that she thinks their date went well. And that’s all. I had no idea why she was so obsessing over him. Of course by her going out to the bar alone she meets Alex who we instantly, once he starts telling her about dating from the guy’s point of view, realize is the one she really digs. I can’t even count how many times I wanted to punch Gigi in the face. She acts like a pathetic whiner, and I feel bad for women who go to this movie and have to actually attempt to identify with her. I have to admit that Gigi and Alex would make a nice couple, but I’m not so sure it’s worth waiting over two hours for it to happen. And I actually thought the biggest twist (spoiler alert) is that Bradley Cooper’s character had been smoking the whole time.

In the end, if you have a uterus, you’ll probably enjoy everything that goes on in “He’s Just Not That Into You.” You’ll probably even enjoy the quick testimonials about dating that director Ken Kwapis employs to help give the film a When Harry Met Sally… sort of feel. It feels like an attempt to be “different” but comes off as more of “why can’t I just be watching ‘Annie Hall’ right now?” come on ladies, wake up already. You are too smart for this stuff, now please agree that the wittiest thing about this film is its title and go see “My Bloody Valentine 3D” if you need a Valentine’s Day movie to share with your loved one. GRADE: C

This replica watches sale possess a price-range which is appropriate in order to everyone. The expenses differ depending on the characteristics inside each and every watch. Nevertheless not one of many fake watches have a tendency to be over-priced and also the prices focus on just about all of the prospects. Firetrap Watches tend to be confirmed to marketplace high-class and tag heuer replica worldwide of folks by way of virtually all regions. These folks market breitling replica which are really created, cheap along with way more functions Firetrap Watches a well-known business, which has been advancing similar to none other in the market linked with watch-making. These are the replica watches sale mixture of design as well as technologies, a number of breitling replica sale so the shoppers will probably possess a mixture of to choose from, depending on their demands.

I know there will be many difficulties and challenges but I am determined to do it. If it does not succeed then it will be a lesson for me as well
catmario4.com