Like a Virgin Spring: Horror Remake “The Last House on the Left” is Only a Movie, but Still a Good One 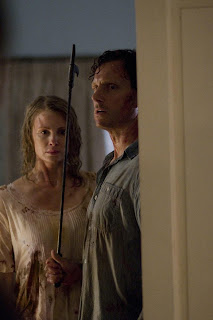 I’ll watch nearly every horror movie that is released. Show me your worst: Show me blood, show me guts, show me brains, show me people being ripped apart. It’s cool with me. Having said that, I’m not so much a “fan” of Wes Craven’s 1972 film debut “The Last House on the Left.” It's more an interesting film to discus, analyze and dissect rather than actually enjoy. I mean I can watch horrible things on screen, but I’ll be the first to admit that I don’t particularly enjoy watching a group of disturbing delinquents savagely abuse, torture, rape, murder and disembowel a pair of young teenage girls. While this may have been classified as a horror film back in the day, today it holds up as a political and sociological statement of society (and response to Vietnam and the Manson murders) and is completely raw, shocking and disturbing, if only because you think everything that is happening on screen is actually happening. But alas, as the original trailer so kindly pointed out, it's only a movie.

Having said all that, this new remake, supervised by Craven himself, ups the ante in terms of suspense, production value and actual entertainment value. This is a film, while yes disturbing at parts, is still 100% more watchable than its predecessor. And why is that? Because they certainly play down the torture sequence and up the ante in terms of the revenge of the scorned parents. But maybe I’m getting ahead of myself. Let’s lay out what this movie is all about.

Basically we have a teen girl and her parents who are vacationing in their lake house in the middle of nowhere. Seriously, what is with people in movies who have vacation homes in the middle of the woods? It’s not exactly relaxing to think I could be murdered and scream for help and no one would ever hear me. Mari (Sara Paxton) asks her parents (Monica Potter and Tony Goldwyn) if she can borrow the car to go into town and hang out with her girlfriend Paige (Superbad’s Martha MacIsaac). Her parents are weary (because Mari’s old brother died a year ago) but let her go anyways. Her father, a surgeon, gives her a wad of dough and a kiss good bye. While in town Mari and Paige meet a strange but nice enough boy named Justin (Spencer Treat Clark) who says he can hook them up with some good weed. Like rebellious teens tend to do in movies like this, they go back to the hotel room where his father Krug (Garret Dillahunt) is staying and they smoke up. Daddy comes home early with his girlfriend Sadie (Riki Lindhome) and younger brother Francis (Aaron Paul). Oh by the way: these people are absolute lunatics and just previously murdered two police officers the night before. This disturbing family unit takes Mari and Paige on a crazy adventure that ends in death and despair in the middle of the woods.

What follows is the “difficult to watch” sequence of these wackos hanging out in the woods while they torture these innocent girls. The original film’s take on this sequence was much more graphic and disturbing (they force one of the girls to pee her pants for crying out loud) and it takes up nearly half of the film’s runtime. Here director Dennis Illiadis makes it just one section of the film. Screenwriters Adam Alleca and Carl Ellsworth add more character development and actually create people easy to sympathize with. We’re supposed to feel nothing but hatred for the murderers, which is obvious because once these guys end up at the house of Mari’s parents, both unbeknownst that this stranded “family” has left their daughter for dead, we’re on the edge of our seats waiting to find out if they will figure out who these loons really are. The ending segment of the film, which includes Mari’s parents seeking the ultimate revenge (which the audience screamed and cheered with delight) is actually a lot more entertaining and suspenseful than the original. Like most of the recent horror remakes the film benefits from a bigger budget and more production value (and 100% better acting), but it’s still missing the grittiness (i.e. where are the intestines?) that made the original such a cult hit. Although by getting the film out of the 70s, it makes for great use of everyone's favorite kitchen appliance.

“The Last House on the Left” is one of the more enjoyable horror remakes. It’s hard not to make comparisons to the original, as is the case with most of these films, but it can stand on it’s own. Anyone interested in where Wes Craven came up with such a shocking story should probably seek out Ingmar Bergman’s “The Virgin Spring,” a film which I have not seen myself, whom some may be surprised to find out won the Academy Award for Best Foreign Language Film. How shocking is that? GRADE: B

OK -- I gave in and read your review before I wrote mine. This is a really great review Chris!

haha thanks, i knew you couldnt resist my potent writing.