I’m a Dancer! “Black Swan” is an Unnerving and Strange Ballerina Fright Fest 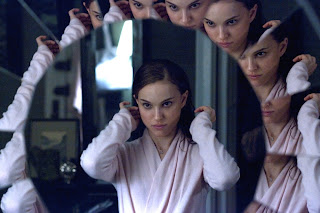 How is it that I have seen two Showgirls-like films within nearly weeks of each other? Is 2010 the year of honoring one of the most rewarding and entertaining cult films of all time? Maybe part of its 15th anniversary celebration? We got the splashy musical form of Showgirls around Thanksgiving with the Cher-tastic “Burlesque” and now we have the ballerina horror flick version known as “Black Swan.” Ok ok ok, I’m really only joking around “Black Swan” is a serious film with great awards potential and Burlesque and Showgirls probably don’t deserve to be mentioned with it, but come on, I can’t be the only one who spotted some strangely suspicious similarities: “Attack it! Attack it!” equals “Thrust it! Thrust it!” and the story about the rival between two lesbianonic female dance rivals seem a little obvious to me. But I digress. What’s important here is that “Black Swan” is a great film and a particularly strange yet interesting one. It’s a movie that practically demands to be seen more than once because there’s really so much going on I can’t imagine I was able to take it all in one sitting.

Let me get something out the way first. “Black Swan” is a horror film. There I said it. Don’t believe me? When you watch the movie I’m pretty sure you’ll either jump (I did) make some kind of audible sound of disgust (I did) or want to hind your eyes (I almost did). There are frightening images here. Of course this isn’t the time of horror film where a crazy guy in a mask stalks large breasted coeds, but it relies on disturbing images and delving deep into the subconscious of its emotionally and psychologically damaged heroine. In a way it reminded me a lot of Roman Polanski's "Repulsion" and even some of David Cronenberg's early movies. The film stars the wonderfully engaging Natalie Portman as Nina Sayers, a dancer in a New York City ballet company. Like most professional dancers, she's obsessed with it. The company’s director Thomas (Vincent Cassel) has announced they will be doing “Swan Lake” but a version in which the main star will have to act out two parts the White Swan (innocence/virginal) and the Black Swan (cunning/sexual). He replaces the “aging” ballerina star played by Winona Ryder and the ballet-obsessed Nina fights for the role which she gets. Enter her main rival Lily (Mila Kunis).

The film’s script (written by Mark Heyman, Andres Heinz, and John J. McLaughlin) then focuses mainly on Nina’s obsession with dance, her attempts to find the “darker half” of her personality, and how this new girl Lily begins to warp her mind. As the virginal (it’s assumed by not made clear) Nina, part of her psychology involves being able to “let loose” in order to fit the Black Swan role. Thomas even gives her an assignment to help her out: he tells her to go home and touch herself. This brings us one of the film’s most disturbing and frightening scenes when Nina begins to enjoy herself under the covers, turns around and begins humping her bed and when she looks over she sees her mother sleeping in the chair next to her bed. What a nightmare! And that’s because Nina has yet another horror in her life: her obsessed mother Erica played by Barbara Hershey. Erica is a former dancer as well and she keeps a close eye on Nina. She’s one of those wacky stage mothers who never found success herself and would rather enjoy success through her own daughter.

Since this is a Darren Aronofsky film there are plenty of disturbing things going on here. As rehearsals for “Swan Lake” progress Nina becomes more and more psychologically unstable. She has weird dreams and visions, of which she’s not sure what is real. She seems to be scratching at her back which becomes more and more damaged as the film progresses and her skin sort of begins to become “bird-like.” Perhaps Nina’s only way to play the role of the Black Swan is to actually become one in her own mind. Aronofsky is great a great director. He’s great at makes horror films where one wouldn’t normally find one (i.e. Requiem for a Dream) and he’s great at giving us character studies about people who are obsessed with their careers (i.e. The Wrestler). Here he combines the two in a remarkable piece of filmmaking. Look at the way he uses the wonderful texture of his 16mm film stock to get at the nitty gritty of the ballerina world. A happy film about dancers would be much more glossy and shiny; here we’re given the opposite. This is a dark and almost ugly film. Look at the way his camera follows Nina so closely when she’s walking to work and from work or even in her dance routines; sometimes you expect Portman to hit the cameraman in the head.

“Black Swan” is truly a sight to behold. It has some grotesque and yet beautiful images. It features great performances and pretty mesmerizing direction. You feel like you’re begin guided by someone who knows exactly what they’re doing and doing this specially for a certain purpose. There are no unintentional shots in this film. “Black Swan” is a pretty bizarre backstage flick and it may leave you scratching your head. But don’t scratch too hard or Barbara Hershey use her scissors on you… GRADE: A