Punch-Drunk Glove: “The Fighter” is a Knock Out 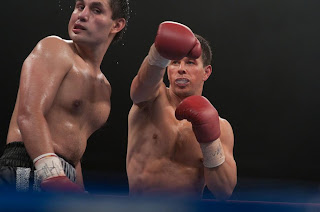 Do I know anything about boxing? No. Do I like watching boxing? No. Did I love the movie “The Fighter?” Absolutely yes. It’s funny when a filmmaker can make you interesting in a subject you don’t care much about. But perhaps that’s because “The Fighter” isn’t so much about boxing but rather a young man trying to make something of himself without letting his borderline crazy family getting in his way. “The Fighter” tells the true story of Massachusetts welterweight boxer “Irish” Mickey Ward and him trying to deal with his crack-addicted half-brother Dicky Eklund who was a fighter himself. Mark Wahlberg plays Ward and he is great. However the real standout here is Christina Bale giving one of his best and most impressive performances as Eklund. I’d be shocked if I didn’t hear his name called out on Oscar night.

I think most of the success of “The Fighter” can be attributed to most of the story revolving around Ward’s strange interactions with his family. His mother played here by the wonderful Melissa Leo was his manager. She is the epitome of Massachusetts white trash and seems like she could be a cousin of Mona Lisa Vito from “My Cousin Vinny.” She has nine children, her sons Mickey and Dicky and seven daughters who seems function as her own female entourage. The sisters are always together and almost always shouting over each other. Sometimes they’re just there in the scene as Mickey interacts with his mother and brother and his new girlfriend Charlene played superbly by Amy Adams. I give the film credit (specifically director David O. Russell and the film’s three screenwriters) for spending so much time with this people. They are funny but the film is a drama but the movie finds a perfect balance of with its humor without ever going over-the-top.

What is it about boxing movies that always make such great movies? I’m not quite a fan of the joyous underdog story “Rocky” mostly because I saw it’s countless imitators first and I didn’t really enjoy Martin Scorsese’s gritty boxing tale “Raging Bull” again for the same reasons, but something about “The Fighter” just simply works as great dramatic filmmaking. You care about Mickey because of what he has to deal with and you find yourself caring about a guy who’s this close to completely throwing his life away because he’s hooked on crack. That’s why it’s not really just a film about boxing., much in the same way the success of “Million Dollar Baby” hinged on the fact that it was much more than just a boxing movie. This film spends a surprising amount of time on Dicky’s storyline and his character has a fully satisfying story arc which makes it simply a standout in a movie that’s already great to begin with. Russell stages great fight scenes, especially at the film’s end, that I almost wanted to stand up and cheer. Sure we’ve all seen it before but it just works.

“The Fighter” is just simply an all-around great movie. There seems to be something about film set in and around Boston that just work in movies, whether it’s “The Departed,” “Gone Baby Gone,” “The Town” and now “The Fighter.” It features terrific performances, great characters to care about and superb direction. Hands down “The Fighter” is simply a winner. GRADE: A

The color palette is quite simple, giving this replica watches uk a tasteful look of simplicity and taste. It can be perfectly accessorized to a quality suit, and can be worn to any occasion, from an important replica watches uk meeting to a fancy night out at the opera, to an important social event or gala. It can be worn to more casual hublot replica watches but this watch will shine in a high class environment. The quality materials that were used to build this watch give it a timeless quality and are assured to make this watch look great for a very long time. The diameter of this watch is watches store, making it perfect for all types of wrists from the very small to the bigger types of wrists. It has a 21 rolex replica uk automatic breitling replica sale with a smooth sweeping second hand. The case, strap and bezel are made out of high quality stainless steel. Steel that is brushed and polished to give off an replica watches of toughness and smooth elegance.

Congratulations on having one of the most sophisticated blogs I've come across in some time! Its just incredible how much you can take away from something simply because of how visually beautiful it is. You've put together a great blog space –great graphics, videos, layout. This is definitely a must-see blog! noticiasdealcorcon.com

My cousin and I had been debating this topic, he is generally looking to show me wrong. Your view on this is fantastic and exactly how I really think. I just sent him this web site to demonstrate him your point of view. After browsing around your site I book-marked and will be back to read your new posts!   hadeel web