Into the West: The Coen Brothers Hardly Make a False Move with “True Grit” 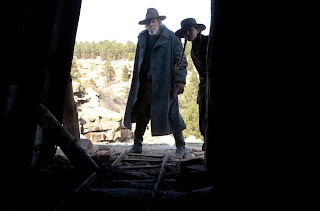 My favorite Western is “Back to the Future Part III.” I realize not only is this blasphemous, but it also doesn’t make any sense. And that’s because to be perfectly honest, I’m not a fan of Westerns. The components that make up a Western never really interested me. Was it a surprise that I was, at first, disappointed with Quentin Tarantino’s second Kill Bill movie, seeing as though it was more Western-influenced than the first part? Not really. Westerns to me, like their setting, seem ultimately dry and dull. I really only saw True Grit for two reasons: its Oscar buzz and because the Coen Brothers were behind it. I could care less that it’s a remake of the John Wayne classic. I haven’t seen it so it means nothing to me. But after seeing this updated “True Grit” I can say that I did find myself entertained, but not nearly as much as someone who would more fully appreciate this type of film.

“True Grit” makes a sort of strange turn for Joel and Ethan Cohen. They are known for their quirky flicks that are usually dark but have a strange sense of humor to them. They are true originals. Even if something like “No Country for Old Men” was based on a novel, they certainly put their own stamp on the material. That movie is sincerely a Coen Brothers movie, no question. Here in True Grit you’ll have to look a little harder. But they are certainly there. Here this time they not only working from a novel (by Charles Portis) but this is the second time this story is hitting the big screen. Jeff Bridges (a reason along to see this movie) steps into the Oscar-winning shoes of John Wayne as Rooster Cogburn, a man hired by a fourteen year old girl named Mattie Ross (newcomer Hailee Steinfeld) to avenge her father’s death. Mattie’s father was killed by the coward Tom Chaney (Josh Brolin) and Mattie is hell-bend on revenge. Steinfeld certainly is a find. This is her feature film debut and you’d think she’d been in twenty other movies. After some disagreements, Mattie and Rooster set off to find Chaney in Indian territory. They are also joined by LaBoeuf (an equally good Matt Damon).

That’s pretty much all the story offers, as since this is a more traditional western, the plot is simply about vengeance. Of course the performances elevate this thing and the beauty camerawork by long-time Coen collaborator Roger Deakins is beautiful (although his work here isn't nearly as flasy or interesting as what he did with "The Assassination of Jesse James..."). There are lots of chases and guns shooting and lots of greasy, dirty bad guys here as well. And despite all the traditional aspects of the film, there are some genuine Coen touches. I’m not sure if in the original film LaBoeuf’s tongue gets nearly bitten off and Rooster yanks the bitten part out of his mouth, but here it seems overwhelmingly like a great, squeamish Coen Moment. The film doesn’t reach the level of intensity of “No Country for Old Men” and is not nearly as violence (this flick is PG-13) but there are some pretty violent things going on. Including witnessing three men getting hanged. One of which comically doesn’t get any last words.

The Coen Brothers are at it again and they certainly put their stamp on this True Grit remake. Fans of Westerns will be pleased and non-fans will find some things here to enjoy. I can’t say it’s converted me into a fan of this genre, although the film’s third act is pretty riveting, however you’d be hard pressed to find anything truly disappointing here in “True Grit.” GRADE: B

I every time used to study post in news papers but now as I am a user of net so from now
I am using net for posts, thanks to web.