Stutter Island: “The King’s Speech” is Certainly a Crowning Achievement 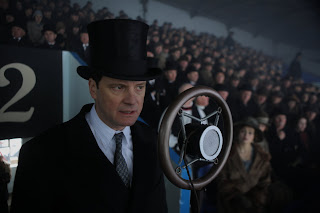 “The King’s Speech” is one of the Oscar frontrunners for Best Picture. And I could see why – if this were the mid-90s. The problem is that the Academy rarely goes for the “British period piece” anymore. To some, myself included, it was a shock that Atonement was nominated a few years ago (it’s director was snubbed which showed a sign of weakness) and yet here we are in 2010 with “The King’s Speech” about the ascension of King George VI to the British throne. The problem is that to be a good king you must be able to address your people and if you can hardly get a sentence out of your mouth because of stammering, to be quite frank, you’ll look like a fool. This is the true story of the relationship between the popular monarch and his speech therapist Lionel Logue. It was a special relationship and it is simply the best part about “The King’s Speech” and that is due to the wonderful performances of Colin Firth and Geoffrey Rush and their wonderful onscreen chemistry.

I’ll still put my money on “The Social Network” for Best Picture, but in “The King’s Speech” we have everything in place for a glorious Academy Award-baiting movie. We have a period setting, with glorious costume and production design. We have terrific performances from its cast and it’s simply a bonus to be telling a real life story. The film begins with Albert Frederick Arthur George (firth) having to give a speech. He stutters and stammers. Good thing his older brother Edward is the heir to the crown. His loving and supportive wife Elizabeth (Helen Bonham Carter) sets him up with several therapists, one of which makes him stuff marbles into his mouth. She finds the eccentric Mr. Logue (Rush) who insists that, although he’s treating a member of the Royal Family, they be on a first name basis and do the therapy on his own premises. They start a wonderful working relationship as Bertie (as Lionel calls him) begins to warm up to his therapist’s strange methods. He forces him to read aloud with music blasting into his ears from headphones, which makes a recording of his voice sound nearly flawless.

And of course there is all that stuff with Albert having to become the King of England once his brother Edward (Guy Pearce) decides he’d rather marry an American woman than take the throne. All of this stuff is played out in pretty standard fashion and staged well enough by director Tom Hooper. He employs plenty of use of short lenses and close-ups which really through the viewer off kilter. But it’s never extremely flashy and doesn’t exactly call attention to itself. This isn’t the elaborately staged “British period piece” that “Atonement” was. You won’t find any six minute long tracking shots in this film.

What the film has most going is in its performances. Colin Firth, who was also amazing in last year’s “A Single Man” is great here as well. He might as well clear off space on his mantle right now. There’s no competition. Rush is exceptional as well and the two actors play off each other exquisitely. Rush almost steals the film and any scene without him makes you complete aware that something’s just missing. Carter is good too in the role of “the supportive wife” but she’s not exactly relevatory. And Michael Gambon shows up as the dying King.

“The King’s Speech” is a good movie, but it’s not a movie I personally loved. Sure it has the pedigree and all the factors of a traditional Oscar flick, but it doesn’t really transcend anything. Sure it makes you feel good, but in that regard I think “The Fighter” did that much better. I can recommend “The King’s Speech” if you want to see what all the Oscar fuss is about or if you’re a speech pathology student. I smell a field trip! GRADE: B

Fremantle in Perth is a place you mustn't fail to visit for its beauty and history.

Spooky Halloween Party Games - The most controversial Halloween party game is, any
game involving a Ouija Board. Simply sip the norm and try one of our
top ten ideas that do raise money'lots of it.