Where’s the Grief? Nicole Kidman Takes Us on an Emotional Journey Down the “Rabbit Hole” 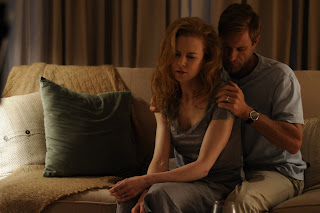 “Rabbit Hole” can be a tough film to watch, but it’s worth every minute. It’s not exactly the depressingly emotional feel-bad drama that it could have ended up being and it’s certainly not a clichéd overly-sentimental melodrama. This is a powerful flick with great acting and a subtly interesting plot you quickly forget just how quickly you become emotionally invested in what’s going on. It’s a story about loss and grief yes, but it’s also about moving on after having faced a terrible tragedy and finding comfort in the unlikeliest of places. And the two main characters of “Rabbit Hole” face the worst tragedy of them all: the death of their young child.

“Rabbit Hole” begins eight months after an “incident” of which we know nothing about. We’re introduced to Becca (Nicole Kidman) and Howie (Aaron Eckhart). They’re a married couple. They look pretty normal. But something is bothering theme. We learn through the film’s sharp dialogue that a tragedy has befallen them: they four year old son was accidently killed. He was hit by a car, driven by a young teenage boy. They’re not quite sure how to deal with their grief. After all, everything in their house reminds them of little Danny. His room was kept the same and he has paintings up on the fridge. Going to a support group for parents who have lost a child. It seems to help Howie, but not Becca. In fact, she hates it when the other parents justify their children’s deaths by saying “God needed an angel.” She isn’t buying it.

This leads Becca to find solace, not an extramarital affair, which usually happens in stories like this, but rather in the forming of a friendship, if you wanna call it that, with the young man who killed her son. They meet in the park and talk. Just talk, and he shares his comic book that he’s writing about parallel universes called “Rabbit Hole.” I think what we’re supposed to get from this is how Becca feels as if she’s living on another level since the death of her son. Nothing is normal anymore. It’s about what the grief process will do to a person.

Of course the movie as a whole isn’t a complete downer. Director John Cameron Mitchell, known for more eccentric filmmaking, (he directed “Hedwig and the Angry Inch” and “Shortbus”) injects some much needed humor into his film. A scene that find Howie and a fellow support group member (Sandra Oh) getting high right before a meeting is simply inspired. The film is written by playwright David Lindsay-Abaire who adapted the script from his own Pulitzer Prize-winning play. His writing is beautiful and poignant and never heavy-handed. Both the writing and directing feel natural and nothing is ever forced down the viewers throats. When we cry or laugh at something emotional on screen it feels genuine.

The aces here are obviously the standout performances. Kidman is great as is Eckhart. They have good chemistry; you really get the sense that this is a real married couple going through a painful situation. Dianne Wiest is also great as Kidman’s mother who also knows the pains of losing a child. A scene between Wiest and Kidman that takes place in a basement is pretty touching and powerful. Wiest in another year would most likely be an Oscar contender, but I fear the film’s lack of strong commercial appeal has likely done her in.

“Rabbit Hole” is a wonderful film from beginning to end. It is moving and unexpectedly humorous. It features great performances, a strong screenplay and perfectly subtle direction. It feels something along the lines of “In the Bedroom” or “Rachel Getting Married” or “Ordinary People” and is certainly worthy of being named alongside those other equally as powerful films. GRADE: A