A Walk to Remember: Colin Farrell & Co. Catch the Midnight Express in “The Way Back” 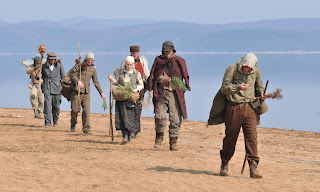 “The Way Back” is Australian director Peter Weir’s first film since “Master and Commander: The Far Side of the World” and like that film did, it should have Oscar written all over it. It’s epic and moving and almost grueling to watch, but for some reason, it’s not a movie that has clicked much with anyone. And that’s most likely because it’s essentially over two hours of people walking and walking. Think “Lord of the Rings” without the fantastical creatures. The film is based on the true story, set during World War II, of prisoners of a Siberian prison escaping and walking 4,000 miles to freedom over the Himalayas into the safety of India. And what a harrowing journey it was and this film is a fascinating account of that nearly impossible journey. Some survive and some don’t. Perhaps the film spoils something when it says at the beginning that three men made it, but that doesn’t matter because it’s hard to say exactly which of the three will make it.

Jim Sturgess, who you may remember from “Across the Universe,” is Janusz a Polish man who is arrested by the Soviets and accused to sabotage and sentenced to twenty years in the Gulag prison. In there he meets some inmates including an American named “Mr. Smith” (Ed Harris) and a Russian criminal named Valka (Colin Farrell, always great). They soon conspire, with a few others, to escape the prison, enter the woods and live off the land as they make their way to freedom. Seven of them escape into the freezing cold forest, during a blizzard no less. And soon one man, who has “night blindness” gets lost and freezes to death. But their journey doesn’t always consist of cold weather they must face the harshness of the Gobi desert. They had made it to Mongolia, but realize that it’s under Communist rule so they decide to press on even further to India. And meanwhile they find a young Polish girl (Saoirse Ronan), all alone, who had been following the group of men. They reluctantly take her in, much to Mr. Smith’s dissatisfaction.

Sure the film is really about a bunch of guys who slowly walk and walk to get to freedom, but its in the details that the film really soars. The hardships these men and girl must face are just incredible. The harshness of the cold and heat seem unbearable. They eat bugs, their feet swell up, they face near dehydration, and the realistic tone of the film really makes you feel a part of it. When they encounter villages of people, Valka even has to murder to steal food and supplies. And the performances are great. Farrell, like he always manages to do, just gets lost in his performance. You never see him as Colin, he’s always Valka. Saoirse Ronan is a fine young actress and I can’t image what it must have been like for her to shoot this film. All of the actors look completely weathered thanks to the wonderful make-up and costume design. You’d think Mr. Weir really made these guys walk thousands of miles.

“The Way Back” doesn’t quite hit the emotional chord of other similar movies, but it also is not emotionally manipulative at all. It sort of reminded me of “Alive” meets “Rescue Dawn” and for all of this stuff that you’ve probably seen before, it does truly feel original. The lush landscapes are equally beautiful and threatening and while there is little characterization that exists, this feels more about the experience than anything else. This is a distressing film indeed, but nothing seems more distressful than not giving it a chance at all. GRADE: B+