Lost in Rotation: “Somewhere” Reflects the Dullness of the Celebrity Lifestyle 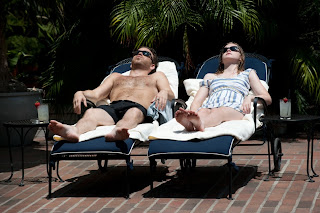 At the beginning of “Somewhere” actor Johnny Marco has no where to go. He lives his life: he gets visits from strippers, sometimes he hangs out with his buddy, he drives around in his Ferrari, and he takes part in publicity events for his film. To call his life mundane would be an insult to people who have mundane lives. Despite the fact that he’s a Hollywood actor, he seems to hangout mostly by himself. He does have a preteen daughter who comes to visit him and in a short time he begins to reexamine his life. Sofia Coppola who also directed the similarly themed “Lost in Translation” is pretty genius in the way she says so much by showing and saying so little. While I’m not the biggest fan of “Lost in Translation” I see its positives and with “Somewhere” she centers the similar story into the more interesting world of Hollywood rather than the foreign nature of the other film (which obviously was the point, but still I don’t really like that movie, sue me).

The beginning of “Somewhere” is almost boring. Nothing much happens at first, and that is exactly what Coppola is getting at. While in most films about Hollywood actors’ lifestyles are usually glamorized as these fascinating otherworldly people who don’t live ordinary lives, things are much different in “Somewhere.” Maybe it’s more true or maybe it’s not, but for the character of Johnny (Stephen Dorff) his life is almost tedious and doesn’t seem to have much meaning. Johnny falls down and break his arm. And then he hires two pole dancers who dance for him in which he promptly falls asleep. It seems like even though he’s an actor and he’s living in the famous Château Marmont hotel on Sunset Blvd., he almost painfully has no life (and obviously doesn’t know where to go since he literally drives around in circles in the opening scene). In fact much like his arm, he’s a broken man.

Of course that all changes when his daughter Cleo (Elle Fanning) visits for an indeterminate amount of time. He brings her along to several publicity events including a trip to Italy where his film is premiering and he attends an awards show. Coppola certainly knows how to make Americans feel awkward amongst odd foreigners; she certainly portrays Italians no less weird than she did to the Japanese in “Lost in Translation.” The two of them hang out which seems like it would “disrupt” his Hollywood way of life, but in fact it only enhances it and he comes to realize just how dull his life has been.

As odd as it may sound Coppola’s realistic style reminds me of Woody Allen’s similar approach. Her scenes of a Hollywood party seem like doppelgangers of scenes set in LA in “Annie Hall.” Like Allen, Coppola enjoys giving outsiders a look at famous lives. The stagnant and hardly moving camera also reminds me of Allen’s view which is simply as an observer, quietly watching as the scene unfolds. There’s nothing to flashy in “Somewhere” and anyone expecting anything else will certainly feel disappointed. This is a character study more than a deconstruction of the Hollywood lifestyle (although it does have things to say about it) and it features some great performances. The script is fairly strong and in a weaker year would probably be a shoo-in for an Oscar nomination.

The Hollywood life certainly isn’t as fabulous as its cracked up to be and “Somewhere” just shows one example of it. This isn’t a downward spiral story about a drug addict or anything; Johnny seems like a pretty nice, average guy - at least for a celebrity. This is a fine film and a touching story about a father and a daughter. It’s a small simple film, certainly one worth seeing and pondering. But you’ll have to see it if you want to know if Johnny ever actually ends up somewhere. GRADE: B+

They produce replica watches uk a day and you still find a thriving market for replica Rolexes. Rolex watches, a heritage brand, are considered status symbols. The high value material used and the workmanship involved make each replica watches sale a piece of art leads to the high price tags and make it unaffordable for most people. Smart manufacturers cash on this and produce fake ones to sharpen consumer appetite. The rich and famous value rolex replica sale as an icon for quality luxury watches. You will find replicas of this model online and most of them are not worth another glance. When you compare a well made replica watches sale with the original, it is quite difficult to tell the difference between the fake and real one. When you compare the two, fake and real watch piece, you will notice striking replica watches sale in terms of the display style and hour markings. The small dials are of the tag heuer replica sale and size and the hour hands seem identical.