Scenes from a Marriage: Ryan Gosling and Michelle Williams are in Top Form in “Blue Valentine” 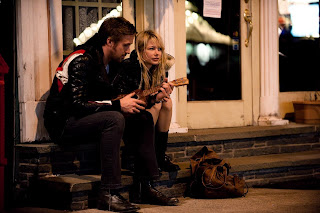 If the recent movie “Rabbit Hole” taught us anything it’s that it’s not impossible to fine a film about grieving parents entertaining. The same goes for “Blue Valentine” which traces the development and dissolution of a marriage. These are two films with tough subject matter and traditionally difficult to watch material, but they are worth seeing first and foremost for their powerful performances. Ryan Gosling and Michelle Williams prove they are two of this country’s most talented young stars and have tremendously successful careers ahead of them. If “500 Days of Summer” was fun, quirky indie comedy of last year, then “Blue Valentine” is the depressing, gritty indie drama of this year. Both films trace a romantic relationship in completely different ways. They both have similar plot structures: crosscutting in time with the beginning and end of their respective relationships. While “Summer” was amusing and funny, “Valentine” is sad and harrowing. And it’s made even more difficult to watch because in the early stages of this couple’s relationship, they are so likable and in love it’s tragic to see how they end up.

I’m not sure that you really feel much hope at the end of “Blue Valentine” but there is one thing that is certain when the film ends: you’ve witnesses some of the year’s finest acting. It’s a rare film that can follow just two actors around for nearly the entire runtime and be completely captivated the whole time. Gosling is Dean, a high school dropout who works for a moving company. Williams is Cindy, who is preparing for med school and takes care of her elderly grandmother. By happenstance Dean and Cindy meet and soon begin a romantic relationship. These scenes of their relationship are actually flashbacks; maybe 6 or 7 years in the past, although we never truly know. Their present status of their relationship is practically nonexistent. They bicker and fight; they get on each other’s nerves. They have a young daughter. They think a weekend at a cheap hotel might bring that spark back, but it seems like the spark has been gone and lost forever. The film opens with the family dog having run off, and Cindy finds it dead on the side of the road. This can’t be a good sign.

What’s so fascinating about “Blue Valentine” is the structure that the film takes. By going back in forth in time you begin to really care about this couple, which makes the scenes set in the present all the more difficult to watch. As they begin to fall in love, in the past scenes (which appear to be shot in shaky 16mm) you begin to fall for them too. That’s because Gosling and Williams seem like such likable people. They feel so normal and natural, almost seemingly plucked off the street. And you really feel as if these two people have a long history together in the scenes set in the present. And that’s due to director Derek Cianfrance’s ingenious decision to have his two actors live together for months before shooting those scenes. They built an off camera history which really translates on screen. And they certainly looked weathered, what with Goslings receding hairline and Williams worn in eyes. And besides, look at how difficult a job these two actors have. They have to be lovable and irritating all at the same time.

This is a small indie film that feels born of another time. As a film of the gritty intimate films of the early 1970s, it sort of has a New Wave vibe. It’s uncompromising in its depictions and it refuses to take the easy way out. It, now famously, features some intense sexual scenes which shocked the MPAA, but doesn’t quit feel all that shocking as you’re watching the film. The only thing truly shocking about the film is how real it feels. This is certainly a great combination of wonderful filmmaking and great acting which equally a compulsively watchable and distressing story about falling in and out of love. GRADE: A-