Abnormal Activity: “Chronicle” is an Innovative Flick in a Well-worn Genre 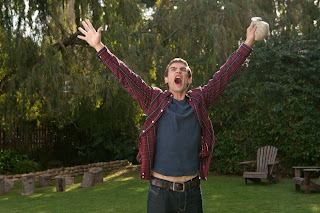 Is there any genre more worn out these days than the “found footage” film? They’re usually scary movies either on a low budget (like “The Blair Witch Project”) or big studio films made to looks like they were filmed on a low budget (like “Cloverfield”). Now we have a superhero film shot with shaky handheld cameras made to look like something you’d watch on YouTube. And somehow with all the Paranormal Activities and Apollo 18s out there, “Chronicle” manages to make something worn out feel fresh and new again. Did “Chronicle,” which tells the story of three teenage boys who gain superpowers after coming in contact with a glowing boulder, really need to be told in this way? Not a chance. But somehow the sometimes cheesy effects seem more realistic when seen through he lens of a cheap, handheld camera. I was surprised by how much I was drawn to the characters in “Chronicle.” Andrew (Dane DeHaan) is the main character who we follow around. He’s a typical geeky teenage boy. He’s purchased a video camera to document… what really? His pathetic life? Who cares really. He gets bullied in school. His mom is bed ridden and dying. His father is super abusive. His only real friend is his cousin Matt (Alex Russell) who gives him rides to school. One night at a party, Matt and the popular guy Steve (Michael B. Jordon) find a hole in the ground in the woods. Of course they go inside; Andrew hesitantly goes in there too. Something is glowing and humming. And for whatever reason, the next footage we see is weeks later, when the three boys now apparently have the power to move objects with their minds. I’m sure most kids would freak out, but these kids take the opportunity to pelt each other with baseballs.

It’s obviously only a matter of time before these kids realize the potential of their new found powers. And it’s interesting to see how each one deals with it. I’ll be honest in saying I wasn’t exactly sure which character would go down the obvious path of “darkness.” Think Obi-Wan and Anakin, you geeks, you. Yes, this is essentially a superhero original story told through shaky first person camera trickery. The camera work is pretty good actually. There are moments when it feels genuine, and then there are some shots so well composed, you’d think Andrew were an Oscar-winning cinematographer. If you can get past the gimmickry of the way this story is being told, you will find a rather fascinating character study. Writer Max Landis doesn’t necessarily give us anything very groundbreaking about teenage life, but I found one character’s descent towards madness pretty compelling. Director Josh Tank makes an impressive debut and stages things certain sequences that will make your jaw drop.

There’s not much else that can be said about “Chronicle” without giving too much away. If you’ve seen the trailer you probably already know more than you should. Superhero films are more popular than ever (we got four of them just this past summer, and three more on the way this summer) so it’s cool to see one done with a dose of reality. Take away those silly costumes, megawatt superstars, and 200 million dollar budgets, and you can still find a gripping story of good vs. evil. GRADE: B+

That is very fascinating, You are an excessively professional blogger.
I've joined your rss feed and stay up for in quest
of more of your excellent post. Also, I have shared your site in my social networks

The cloud disperse along with the self shines just like the sun. A
different strategy to manage your downloads is merely to sync them up between your PC as well as your Blackberry.
Easy when you're conscious what you are looking for inside a product and
difficult when you don't have something for choosing the best Clickbank products.

JannethManalu said...
This comment has been removed by the author.
12:34 PM