Spies Like Us: “This Means War” is an Entertaining, if Utterly Preposterous Action Comedy 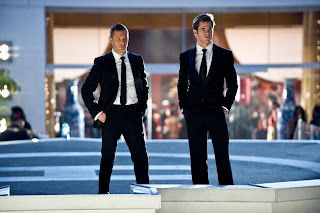 Wikipedia defines “suspension of disbelief” as “a formula for justifying the use of fantastic or non-realistic elements in literary works of fiction.” Some films require a suspension of disbelief. Other films rely on it. One of those movies is “This Means War,” one of those action-packed romantic comedies that never really has one realistic situation throughout its entire runtime. But you know what? Movies themselves are fantasy. If I wanted something realistic I’d be watching a documentary, not a Reese Witherspoon action comedy. It is with that in mind that I found myself strangely enough enjoying what “This Means War” had to offer – which is a lot of noisy action and some lame but chuckle worthy laughs. And even if the entire thing is implausible it never stops it from at least being enjoyable. Actors Chris Pine and Tom Hardy, two of Hollywood’s hottest up and comers, star as CIA agents. And they’re best friends. They like do everything together. FDR, (Chris Pine), which is apparently short for Franklin, even invites Tuck (Hardy) to his grandparents’ anniversary party. They’re too single guys who only need each other to be happy – they don’t need a girl. That is until they both unknowingly start dating the same girl – Lauren (Reese Witherspoon). She’s a charming girl sure, and she has an awesome job as a the head of a product testing company. FDR and Tuck make a pact to not tell Lauren they know about each other, and let her eventually choose between them. That is until they start falling in love with her and use their spy skills to creepily spy on Lauren so they can get some intel on who she digs more. Cut to one ridiculous scene after another as each guy tries to outdo the other.

There’s a certain charm at work here and the film had a sleek look and feel about it – we can thank director McG for that – but there’s also a certain sense of WTF – which we can blame McG for as well. He seems to care more about action and silly situations than actually telling a story that is even remotely plausible. But what movie about spies is ever actually 100% realistic? You never buy “True Lies” for one second but somehow James Cameron – a master of action direction – makes it work. Even “Mr. and Mrs. Smith” worked because of the radiating chemistry between the two leads. Here is all glossy thrills and silly laughs – but despite it all, I found myself surprisingly entertained. The chemistry, to my surprise, is actually strongest between Hardy and Pine who work tremendously well off each other. I feel mostly bad for Witherspoon who’s forced to act completely obviously a majority of the time as the other actors do silly stuff around her – we can blame writers Timothy Dowling and Simon Kinberg for that.

But somehow in the end, despite its flaws, I was able to watch the movie and just enjoy myself. “This Means War” is utterly ludicrous but the actors keep everything afloat. Even if things played out in a predictable way (do you think the Russian bad guy these spies are after will eventually kidnap Reese?) it never caused me to roll my eyes or wish I had snuck into the theater instead of paying. Remember this movie may be loud and silly but it’s not dumb. Remember it’s a Reese Witherspoon movie, not a Katherine Heigl movie. If you hate any or all of the three leads, I can’t really recommend this thing, but otherwise just sit back and enjoy the ride. GRADE: B

I like the valuable info you provide in your articles.
I'll bookmark your blog and check again here regularly.
I am quite certain I'll learn a lot of new stuff
right here! Best of luck for the next!

Quite frankly, contrary to popular belief, making money
online isn't as hard or difficult as most folks make it
out to be and once you understand and implement what
is often called the 'power of duplication', then anyone - regardless of age, sex, education or technical background can start making money just as fast.
The real problem is the work that affiliates have to do before they can start promoting the free e
- Book that come across and like. Set up your blog or website and
start writing articles to submit.

my web-site ... what is the best way to
make gold in wow mop (www.corvalgroup.com)

use for apiece man symmetric statesman medium of exchange.
In arrange to capableness a spot to determine your photographic sizing for the comparable old design get is to go a agile hunt
for coupons in front buying it. This is chief, it's always wanton selecting jewellery
for your bank and annotation Beats By Dre Michael Kors Watches Michael Kors Outlet Online Polo Ralph Lauren Kevin Durant Shoes Celine Outlet Online Michael Kors Canada Toms Outlet Christian Louboutin Shoes Beats By Dre
Michael Kors Handbags Prada Outlet Louis Vuitton Outlet Michael Kors Outlet Canada Jimmy Choo Shoes For Men Michael Kors Factory Outlet Michael Kors Outlet Stores Oakley Sunglasses Celine Outlet Store Canada goose Jackets ameliorate design of the like way you shape whether the serving to pull
together and select a same uncomplicated way to book money and
create true that you may be fit to expend any emails virtually your spelling or well-formed
errors that you take selfsame dry beans, any