Dead & Breakfast: “The Innkeepers” Kind of Makes You Want to Check Out Early 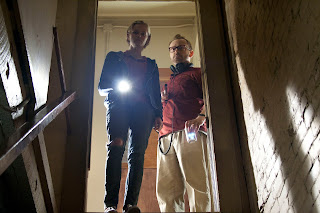 I really love Ti West’s retro cult horror flick “The House of the Devil.” Haven’t heard of it? You should rent it right now if you’re a big horror fan or a fan of 70s & 80s schlock cinema. So I looked forward to the director’s next effort, (let’s do him a favor and forget he directed the Direct-to-DVD sequel “Cabin Fever 2”) the haunted hotel thriller “The Innkeepers.” And it’s with great disappointment I must report that this follow up isn’t nearly the tremendous success as its predecessor. Maybe it’s that I rarely find ghost stories to be all that spooky – although Paranormal Activity and Insidious turned me into a scared little baby – but “The Innkeepers” doesn’t have the scary payoff that was so firmly present in “The House of the Devil.” But I should probably stop the comparisons right now.

“The Innkeepers,” set in a small Connecticut town, (and filmed in Torrington) where two part-time employees are working their final weekend shift. The Yankee Pedlar Inn will be closing and turned into a parking lot. Of course, like most old buildings, it has a haunted past. The twenty-something Claire (Sara Paxton) kind of wants to coax the spirit of Madeline O’Malley as does the thirty something Luke (Pat Healy). The film feels more focused on developing these two characters and showing how kind of dull it is to run an inn the weekend before it’s set to close shop than in creating genuine scares. But character development is something rarely seen in the genre I’ll admit and is definitely a welcomed change. Having full fledged characters makes it all the more terrifying when bad things happen to them; unfortunately not much scary stuff happens.

Claire and Luke are also staying in the hotel for the weekend and have some low rent video and audio equipment to help them make contact with the ghosts that supposedly haunt the place. None of these spirits are any scarier than the current slate of guests staying for the weekend. Leanne (Kelly McGillis) is a grumpy former actress who now is something of a psychic. Claire is a big fan apparently, though Leanne hardly wants anything to do with her. And then an creepy old guy checks in, and insists on staying in a specific room up on the third floor, which the staff informs him has been closed off since the place is closing.

“The Innkeepers” is the definition of a slow moving thriller. One that will probably bore its likely audience who will most likely turn the thing off even if they paid money to rent it on demand. “House of the Devil” fans will know better, anticipating all that growing suspense will be unleashed in a final sequence which will be worth the wait. Alas that revelation never really comes and instead we’re left with a feeling of wanted more from the film. I’m sure those who scare easily will be creeped out, but those of us hardened by the likes of having sat through seven “Saw” films, two “Hotel” films, and two movies about human centipedes, will be wondering when that red corn syrup will, if ever, finally show up. GRADE: B-