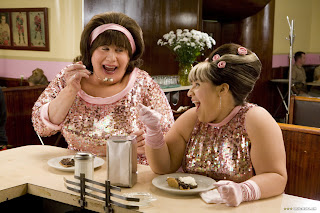 The movie musical “Hairspray” is probably the tamest John Waters has ever been. And that’s most likely because he didn’t write or direct this version. Instead, this fantastically enjoyable film is based on his cult flick from 1988 starring a pudgy Ricki Lake who dreams of fame in the form of dancing on a local dance show in Baltimore circa 1962. This upbeat musical is also based on the equally upbeat Broadway show that won numerous Tony Awards back in 2002. With original songs from composer Marc Shaiman, this version of “Hairspray” is every bit as enjoyable as live theatre and it’ll have you taping your toes ‘til Tuesday.

Everything that director Adam Shankman could have squeezed into frame is utterly enjoyable from start to finish. I liked the colors, the spirit, the costumes and the set. The film takes place in good old 1960s Baltimore. After singing about rats in the street and the local flasher (John Waters in a perfect cameo) Tracey Turnblad (newcomer Nikki Blonsky) hitches a ride to school on a garbage truck. She and her friend Penny (the comical Amanda Bynes) watch The Corny Collins Show everyday after school. It’s an American Bandstand-type local dance show that stars the local hunk of their dreams Link Larkin (Zac Efron of the bafflingly popular “High School Musical”). Of course, it’s only the local white teens who get to shimmy and shake everyday on the show, except for once a week during “Negro Day” in which the Black community gets its share of grooving. Mean lady manager Velma Von Tussle (a magnificently wicked Michelle Pfeiffer) rules the roost and insists that integrations shall never occur. After all, these are (gasp) colored people! And did I mention John Travolta plays Tracy’s mother. Her big fat geek mother.

The film has a high camp value without ever really going overboard (this isn’t “Rocky Horror” after all). Newcomer Nikki Blonsky as teenage dreamer Tracey was, at first, little too perky for my taste, but she is a great talent and she definitely carries the movie with its cheery beat and important message about tolerance, the importance of change and being proud of who you are. It carries a message, but doesn’t really cram it down our throats. If we can be singing along and taping our toes and receive a little social commentary, what’s wrong with that?

The movie is so extremely lively that it feels as if you’re watching the play. You really don’t feel very disconnected from the story as you do in other movie musical adaptations like “Rent” or “The Producers.” “Rent” was too serious to be fun and “The Producers” was too silly to be taken seriously. “Hairspray” seems just right. And even if you don’t know the music going in, you’ll be singing the songs on your way out. Travolta does a good job of making us believe he’s a woman. While the make-up job isn’t exactly flawless, he has the acting chops and enough good dialogue (thank you screenwriter Leslie “Mrs. Doubtfire” Dixon) to let us forget that there’s a man behind the mask. On the other hand, Travolta in drag seems kind of gimmicky so I wouldn’t recommend seeing this movie just because he’s in a fat suit. We’ve all seen “Mrs. Doubtfire” and “Toosie.” This isn’t the king of drag queen movies by any means, but it has solid energy and a fun beat that will have you smiling even after the credits roll.

I actually found myself believing that Edna and Tracy are mother and daughter dancing and shimming to Marc “Everyone has AIDS” Shaiman’s catchy and funny tunes. The supporting cast is also terrific. Pfeiffer is great as the racist TV manager. I love her in evil roles (“I’m Catwoman hear me roar!”) and here she really gets to shine. It’s fun to be able to hate her. James Marsden has a surprisingly good turn as the host of The Corny Collins Show. I’m actually a big fan of Amanda Bynes, and I’m probably the only one who finds her film “She’s the Man” utterly entertaining. She has good comic timing and makes a good friend to Tracy. And let’s not forget Christopher Walken as Edna’s faithful husband. You haven’t lived until you’ve seen Walken and Travolta in a fat suit dancing together. Queen Latifah belts out some great tunes, as does Elijah Kelley as Penny’s forbidden love interest (thanks to conservative mommy Allison Janney, as indispensable as ever).

The movie plays up the ‘60s iconography greatly, not only with period costumes and the hairdos, but the political climate as well. We’re talking segregation! Like seriously, there’s a rope separating the Black dancers from the white dancers. Come on! They act as if the Black dancers are Al-Qaeda or something. Frankly the Black students have better moves than their Caucasian counterparts. It’s like “Pleasantville” with racism! “Hairspray” is just fun fun fun. It kind of has the quirky vibe of the 80s musical “Little Shop of Horrors” without the macabre humor. It was amusing and the songs are upbeat, catchy and tuneful (and witty for that matter). I can’t wait for “Serial Mom: The Musical.” GRADE: A-

Thank you for a great explanation. I was looking online for a similar idea and really appreciate it