Blinded By the Light: While a Disappointment, “Sunshine” is Still a Dark Science Fiction Entry 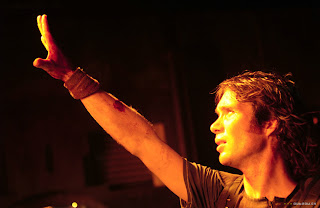 It’s apparent that Danny Boyle’s “Sunshine” succeeds much more splendidly if you’re mostly unaware of cinema’s long list of science fiction space entries. There’s “2001,” “Event Horizon,” “Alien” and many more from where that came from. “Sunshine” borrows heavily from all of those, but I think its purpose is that of homage rather than rip off. If you’re willing to look at “Sunshine” as if it could stand alone, it succeeds as a thrilling space saga that has some moments of wonder and moments of shock and lots of lots of bright light.

The movie Sunshine is kind of like the sun itself. You know it’s there and you know you really shouldn’t look and the longer you stare at it the more damaging it is. If you really look deep into this film, you’ll notice that there isn’t very much original material and you’re more likely to notice its flaws. The basic story revolves around a small space flight crew who has been sent on a mission of mercy. In the future the sun is dying and they must plant a bomb (Armageddon?) to “reignite” it otherwise all of life on earth would parish. The film focuses on the space crew characters rather than overly dramatic melodrama back on Earth. This particular mission is also the second mission to be sent out: the first mission failed in that they first crew was never heard from again. Perhaps a malevolent force is responsible?

The film stars a great cast of what I like to call “serious actors.” The film thankfully gives us serious people, not a bunch of idiotic oil drillers ala Armageddon. It’s easier to care about people who are taking their job seriously instead of silly goof-offs. These actors include Cillian Murphy who’s been a great talent since staring in Danny Boyle’s terrific apocalyptic zombie thriller “28 Days Later.” Crouching Tiger Hidden Dragon star Michelle Yeoh is in charge of the spaceship’s greenhouse, which nurses all of their oxygen and edible plant life. Chris Evans (from Fantastic 4) gives a great performance as a fellow astronaut/scientist.

The film has three distinct acts, two of which succeed. We learn how these scientists live on the ship. We see how their ship holds a huge solar panel that blocks the sun’s powerful rays as they approach closer and closer to their goal. The effects here are very decent for a film that has a particular lower budget than average summer fare. With not nearly as half of the money as, say, “Transformers,” “Sunshine” packs some interesting visual punches. I really believed that these people were in space. Eventually they get a signal from the ship that was the first mission. Eventually going to investigate becomes an unwise move, as the film sets up its least effective act. While it provides some chills and overall dreadful atmosphere, it doesn’t really work because it has an overwhelming “been there done that” feel.

Frankly, the ends of most of Danny Boyle’s pictures are particularly disappointing. I have to admire him wanting to take a risk by going somewhere the audience doesn’t really expect but often times he gets a little silly. And the ending here is sort of a confusing mess that kind of kills everything we’ve seen before it.

Hello, i think that i saw you visited my weblog so i came to “return the favor”.I am attempting to find things
to improve my site!I suppose its ok to use some of
your ideas!!