Aye Robot: “Transformers” is a Blast, But it Won’t Transform Contempt for Michael Bay 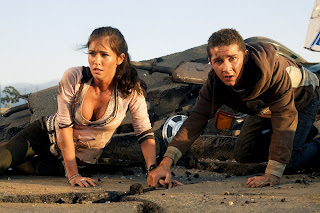 There are several things you should expect in a Michael Bay film, lots of cuts, slick cinematography, lots of military personnel and complete disregard for public property. I mean seriously how many buildings has this guy destroyed in his entire filmography? Michael Bay is a visionary director no doubt and he has his own “style” but he’s constantly ripping himself off. I mean how many of the shots in his latest film “Transformers” were exact replicas from his earlier films? I’m surprised he didn’t just use the same footage from “Pearl Harbor” and erase Ben Affleck. One thing that this film didn’t have which I loved was the absence of uber-producer Jerry Bruckheimer. If anyone is guilty of over-producing it’s that guy. Oh God that guy irks me. Unfortunately we get so many trademark Michael Bay-isms it’s enough to give you a headache from the constant combat and shaky cameras. But, yes, Michael Bay certainly knows how to make an entertaining popcorn movie, if not a particularly memorable one.

The plot here is pretty simple even if you’ve never seen the show. The Transformers are alien robots who can shape shift into metallic objects from anything to automobiles to cd players. There are the good ones (Autobots) and the bad ones (Deceptacons) and they’re both after some kind of cube that is supposedly so powerful that it the Deceptacons want to use it to take over the universe. But to us, it’s just the McGuffin and we don’t really care. We just want to see these robots transform before our eyes and kick each others’ asses.

We can directly compare this film with the 2005 blockbuster “War of the Worlds” and 1998’s “Independence Day.” All are similar in concept and execution, but these two films have something that Michael Bay never does: completely memorable moments. Spielberg’s films, for instance, always certain scenes that stick out: such as the first tripod attack, the ferry attack and the basement attack (in “Worlds”). It’s been a few days since I saw “Transformers” and I can’t really pick out a completely memorable action sequence. That’s because it’s all just action, nothing too special, although he’s completely competent as a director, but what’s exciting to him, doesn’t necessarily mean it’s exciting to me or the rest of the audience. And who could forget the White House or Empire State Buildings blowing up in “Independence Day” no one who saw that film has since forgotten those scenes.

Having said that “Transformers” really is a fun movie and it does have memorable aspects such as rising star Shia LeBeouf, who is as charming as ever. Seriously, there is no stopping this kid. They kid is so charming that he instantly raises it to another level. I mean you could have all the computer effects in the world and it wouldn’t come close to creating the lasting appeal that this actor makes. He imports his charming “Disturbia” teenage angst character and lets him out of the house finally. He adds some humanity to the robotic proceedings and it’s easy for the audience to identify with him. Of course it wouldn’t be a Michael Bay movie without lovey dovey romance stuff, but thankfully that’s mostly a sidenote here. We get Lindsay Lohan look-a-like Megan Fox to fill in. This midriff revealing auto mechanic whiz could give Mona Lisa Vito a run for her money.

The only major flaw is that the film takes a little while to get fully going, (including annoying cross cutting between Shia’s storyline and that of military men surviving an attack in the Middle East) once the good robots are all introduced, there is lots of chatty fun banter between the robots that is just simply wonderful. The film is written by Roberto Orci & Alex Kurtzman, who were responsible for “The Island,” which I enjoyed even though it completely bombed (bad marketing if you ask me). They have given the robots equally corny and funny lines of dialogue and even have them attempting to hide in the backyard from Shia’s parents. They find having to hide out annoying and one of them comically suggests that he “take them [the parents] out.” But not only does it take a while to get going, Michael Bay also doesn’t really know when to quit. That last action sequence goes on pretty much forever.


If Michael Bay’s point was to make a fun live action cartoon, then he has succeeded with “Transformers.” Of course I’ve never seen the original cartoon from the 80s (I know shame on me) so I can’t really compare them, but I think he has successfully transformed this 80s icon into the 21st century with style, wit and entertaining action (lots of action). GRADE: B+

This is a very good tip especially to those fresh to the blogosphere.
Simple but very accurate info… Appreciate your sharing this one.

A must read article!

Thank you for sharing the article
ghe massage