Yellow Tale: “The Simpsons Movie” is Definitely Worth Your D’oh 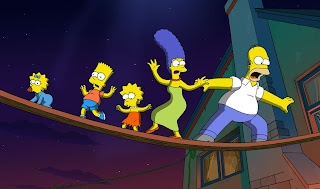 It only took eighteen years but the longest running animated sitcom family has finally leaped triumphantly to the multiplex for a subversive, hilarious time at the movies. Yes, we’re talking colorful 2-D animation with people of a yellow hue in the wonderful Simpsons Movie. I can remember some early memories of catching The Simpsons on Fox when I was a young thing. The Simpsons were all the rage and everyone had a T-shirt that said, “Don’t have a cow, man.” Flash forward 18 years and The Simpsons are still on although I’ve lost touch with them over the years. While I’m more a nostalgic Simpsons fan (only the first 10 seasons are really stupendous) everything you could ever want in a Simpsons full length feature is present here.

The Simpsons Movie trailer gave no real clues as to what the plot of the movie could be. There were so many random lines and scenes shown, that the plot just seemed incoherent. But now it’s completely in focus: basically Home screws up royally, the entire Springfield community wants him and his family dead, and he’s forced to take a long hard look at himself and find the courage to admit that he’s a true screw-up. Of course everyone’s favorite slacker father Homer J. Simpsons really means well, whether he’s ringing Bart by the neck or slacking off at his job at the power plant.

Those who are worried that the movie can’t be as good as it’s first few seasons on TV need not fear. The writers, who are numerous, have come up with really funny gags, lines and situations. Each family member gets his or her time to shine. And like the TV show, the beginning scenes which seem to have nothing to do with anything will set the story’s plot in motion. Green Day performs for Springfield to raise awareness that their lake is the most polluted in the country. The townsfolk respond by throwing garbage at the band. Eventually the town is banned from polluting the lake until Homer decides to dump a silo full of his new pet pig’s droppings into it. This leads the EPA to quarantine the entire town. Meanwhile, little activist Lisa Simpson finds an Irish boyfriend. Bart begins to feel more loved by the Ned Flanders. And Marge is upset that Homer could be so ignorant and dimwitted to cause such a catastrophe.

So the Simpsons are on the run from the angry Springfield mob, while we the audience are on an odyssey of laughs, laughs and even more laughs. There is so much fun stuff here I can’t even describe it all. The film’s humor is a little dirtier since it’s not restrained by TV censors; which leads to the film’s biggest surprise laugh when Bart is “revealed” to the audience. Homer gives the finger and Marge curses, but it all fits along with their characters. There are sight gags galore like Home poking himself in the eye with a hammer and witty dialogue such as little Ralph Wiggum proclaiming “I like men now” after witnessing Bart’s full monty.

If you were a Simpsons fan or are still a Simpsons fan there is so much here to enjoy. And if you’ve never watched the show then there’s no better time to start. Every character is here blown up to live sized proportion with beautiful traditional animation. Like a perfectly frosted donut, “The Simpsons Movie” is a real treat. Mmm donut. GRADE: A-