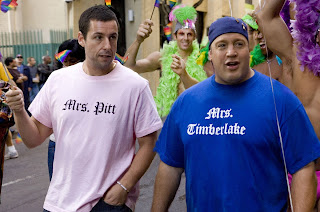 Two straight men get married to reap the legal benefits. I do believe this was a good idea. I really. really do. It’s just that somewhere from log line to finished film something just went wrong. Terribly wrong. I’d buy this situation as a sitcom. But to call the film “I Now Pronounce You Chuck & Larry” a sitcom stretched to feature length would be an insult to television comedy. Kevin James is a funny guy. Adam Sandler used to be a funny guy. One of the writers wrote some Golden Girls episodes and two others wrote “Election,” “About Schmidt” and “Jurassic Park III.” Well there ya have it folks.

Dennis Dugan is one of the most consistent directors in Hollywood. He makes piece of crap after piece of crap and yet he still finds work. He’s responsible for some of the worst comedies. But you know what? I find some of them actually funny. He started with Problem Child, hit it big with Happy Gilmore, reunited with Sandler in Big Daddy, and made the guilty pleasure baseball flick The Benchwarmers. But what he has made with “Chuck & Larry” is simply a bad movie. I’ll be honest I laughed a few times and I really did want to like it. It’s pretty bad, but still watchable.

The biggest insult is a movie that pours out crude humor only to give in to sentimentality at the end. I’m not buyin’ that crap. Either be mean-spirited and rude or be sappy and corny. Never never never mix the two together. You’ll end up looking like an idiot director who doesn’t know his ass from his elbow. And that’s what we get with “Chuck & Larry.” Sandler and Kevin James portray Brooklyn fireman. Sandler is an annoying lady’s man and James is a single father of two (his flamboyant son is a running gag in the movie). James finds out that if he were to get killed in the line of duty his children would be left to fend for themselves or something like that. But, according to plot point 1, if he were to enter into a domestic partnership with a man his “spouse” would be able to inherit all his money or something like that. Why this obvious straight man would consider faking a marriage with a man and not a woman is beyond me. And why Sandler as an annoying homophobe would go along with it is also still beyond me. And there you have the movie, in which these two guys must pretend to be married, while still making gay jokes and eventually becoming the butt of other peoples’ gay jokes.

I wouldn’t really say the film makes fun of gay stereotypes as much as it makes fun of how straight men perceive gay stereotypes. Obviously all gay men have sex 24/7, get excited to find lube at the grocery store and listen to Cher and watch “Brokeback Mountain” all the time. The only thing really insulting is how put together this movie is. The movie just kind of limps along with scenes that seemed to be thrown together at the last minute. The movie was obviously written as a list of jokes, which in turn were written into scenes, which in turn were put together to create a “movie.” And you just know a movie is in trouble when the best part about it is actress Jessica Biel who is decedent as a gay friendly lawyer who Sandler has the hots for.

And of course the movie tries to shove a sappy message down our throats about tolerance, accepting who you are, and letting people live their lives the way they want. All the while they want us to laugh at the stereotypes being flashed across the screen. This movie works like a vegetarian slaughterhouse film with Burger King product placement. It just seems wrong. I still do believe this could have been a good movie. I really, really do. The film isn’t a total loss: it has a pretty decent soundtrack. Well at least that’s something! GRADE: C-

I absolutely love your blog and find almost all of your post's to be precisely what I'm looking
for. Does one offer guest writers to write content to suit
your needs? I wouldn't mind creating a post or elaborating on many of the subjects you write with regards to here.
Again, awesome web site!

Getting from Edinburgh Airport to the city centre is very straight-forward, affordable and will take around
30 minutes. I seem to have been locked out of the system
and I need your help to restore my admin access to the school network.
It always requires a tracking tool and database planning to be prospering.