Not Fonda Bond: “Quantum of Solace” is for Die Hard Fans Only 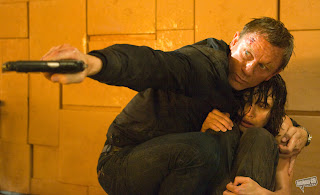 Let me make this quick and painless: I’m not a James Bond fan. (My heroes growing up were of the Freddy and Jason variety.) The first time I saw a James Bond film was a couple years back when the overpraised Bond franchise revamp “Casino Royale” hit the big screen. I enjoyed that film for the most part (although it was about 30 minutes too long). It had some great set pieces and Daniel Craig was great as the new Bond. Did it start a need to see all the other films I missed along the years? No. I’m no more a fan now than I was before I saw Casino Royale. I saw Quantum of Solace out of sheer interest in the fact that a) it will most likely be a huge box office hit b) director Marc Forster, who is the human directing chameleon (seriously, this guy made Monster’s Ball, Finding Neverland, Stay, Stranger Than Fiction and The Kite Runner) and c) the movie isn’t overtly long. Oh and I heard the plot had something to do with water and the environment. “Erin Brockovich” this is not.

“Quantum of Solace” is basically The Bourne Identity Part IV. The movie is pretty much 105 minutes of nonstop action. The quick editing and shaky camera nearly caused me to get a migraine. If you almost threw up watching “Cloverfield,” you’ll probably need a barf bag. What’s worse is that I hardly cared about everything that was going on. Bond keeps killing the bad guys much to M’s (The Dame) displeasure. She insists she needs a least one bad guy brought in for questioning, but Bond insists on dispatching them one after another. To makes things worst for M, she begins to distrust Bond and things it’s possible that he could be a traitor.

It’s my general understanding that this film, while not as well received as Casino Royale, is hands over feet better than any of the films starring Pierce Brosnan. Possibly that is true. You can see that the film wants to let general action fans into the fun rather than just die hard Bond fanatics. Although I still felt like I was missing something. I felt as if I had walked into the movie halfway through. Maybe I’m just slow or maybe the movie is too fast, either way “Quantum of Solace” doesn’t offer much more than a few solid action sequences, most of which while entertaining are simply forgettable. I still haven’t forgotten the spectacular foot chase from “Casino Royale,” which was worth the admission price by itself.

I’m not saying you shouldn’t check out the latest Bond installment. In fact, odds are if you’re a James Bond fan you’ll love it. But this movie wasn’t made for me. For fans only. GRADE: C