About a Boy: “Changeling” is a Gripping Period Drama From Start to Finish 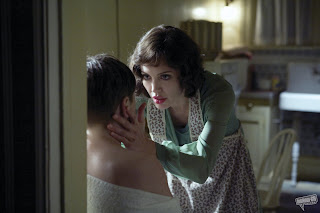 Angelina Jolie have what seems to be 14 children living with her in real life, but in her newest movie “Changeling” she only has one. And within the first fifteen minutes he will be gone. Gone baby, gone. Clint Eastwood’s latest directing effort (is it me or does it seem like this guy could direct a movie with his eyes closed and it would still seem effortless?) is a fascinating story of a woman who son disappears. Just when all hope seems lost the boy returns to her. Except that she insists it isn’t her son. The trailers may get you to want to see this movie, but they don’t even begin to show you what this movie really has hiding beneath the surface.

Hey Academy members, will you just nominate Angelina Jolie please? She hasn’t been nomed since she won for 1999’s “Girl, Interrupted.” She’s more than a pretty face and humanitarian baby adopter. She’s actually a good actress. And here she gives one of the best performances of her career. (I’ve yet to even watch “A Might Heart,” but I hear she was great in that as well). Here she plays Christine Collins. She’s a single mother living in 1920s Pasadena, California. She works at the telephone company and she gets called into work one afternoon which just so happens to be the day she promises to take her son Walter to the movies. She reluctantly leaves her boy behind and when she returns he’s gone. When she calls the police they insist the boy will most likely return, as they always seem to do.

Just when she thinks it seems like she’ll never see little Walter again, she gets a call from the police who say they’ve found her missing child who was in Illinois. Police Captain J.J. Jones (Blair Witch 2’s Jeffrey Donovan) reunited Christine with her son. Except that she says its not her son. It seems to be a simple mistake except that the young boy calls her mommy and gives her a big hug. Christine is shocked. And Jones insists that the boy is hers. She takes the boy home and even realizes that he’s a few inches shorter than her son because she had started a height chart on the wall. How could her son have shrunk three inches in just a few weeks? A doctor hired by the LA police department insists the trauma could have caused the boy’s height to decrease.

Soon Christine begins hounding the police department and asking too many questions. How can this be my son? Why wouldn’t I know my own child? I don’t even want to tell you anything else that happens in the rest of the movie because to say so would spoil the entire experience. It’s not like there is any real plot twist, but the plot itself is interesting enough that it should never be discussed with out viewing the movie first. I will whet your appetite by saying that veteran character actors John Malkovich and Amy Ryan appear here in parts too good to spoil and that’s all I’ll say about that.

This film, like many of Eastwood’s recent films, take you down roads you never though you’d go. I’m sure you went to see “Million Dollar Baby” expecting to see just another boxing movie and yet it was so much more. That is definitely the case here. You expect this film to be about a mother coping with the disappearance of her child and yet there’s so much more going on that the trailers, fortunately, have kept under wraps. And let me just say that screenwriter J. Michael Straczynski based this story on an actual case from the time period (I read he even placed actual newspaper clippings into the script to remind those that read it that it all really happened). It is a story so fascinating and yet so disturbing you can’t simply turn away. I suggest looking up the real story, but only after you’ve seen the whole film.

This is a movie that is much more than a kidnapping drama, it is a story of women’s rights and political corruption that, even though takes place during the 20s, still seems to find relevance in our current era. This is a striking and emotionally charged (and surprisingly unsettling) film that will stay with you long after the final credits have rolled. GRADE: A