I Will Be Your Father Figure: “Role Models” Will Cast a Level 5 Charm Spell on You 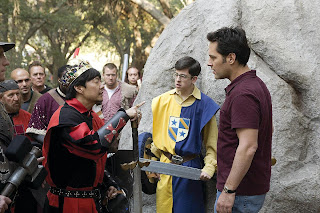 “Wet Hot American Summer” is my 12th favorite movie of all time. Director David Wain, who managed a comedy laugh riot from his little independent movie from 2001, then went on to direct last year’s anthology flick “The Ten.” It was mildly amusing yet no where near as successful as “American Summer.” Now he presents us with “Role Models” which is a great staring vehicle for long time David Wain collaborator/friend Paul Rudd. I remember Paul Rudd from way back in 1995 when he was the lead in “Halloween: The Curse of Michael Myers.” Back then he was credited as Paul Stephen Rudd. Modifying your name because you were in a craptastic movie isn’t going to fool me Mr. Rudd. But you certainly redeemed yourself by also being in “Clueless” that year. And you all know him from his parts in “The 40 Year Old Virgin” and “Knocked Up.” But enough film history. Rudd now shares the screen with Stifler himself Seann William Scott.

Danny (Rudd) and Wheeler (Scott) are best buddies and co-workers. They work for a energy drink company in which they make rounds at local schools advocating not doing drugs (except for caffeine of course). After a particularly rough day with his girlfriend (Elizabeth Banks) Danny finds himself in a bit of a legal tussle with Wheeler. Basically they can either take 30 days of jail time or 150 hours of community service. Since a man’s biggest fear is being raped in prison, they opt for community service. Danny’s ex-girlfriend sets the pair up with an organization called Sturdy Wings which is a sort of Big Brother, Little Brother program in which adults are paired with kids. The organization’s founder is played by the endlessly hilarious Jane Lynch who is at her scene-stealing best. If you’re a fan of her then her scenes alone are worth the price of admission.

Danny is set up with Augie (McLovin) who is a rather awkward teen who is a big fan of fantasy role playing. He even wears a cape 24/7 much to his parents’ concern. Wheeler is even worse off. He is paired with Ronnie (Bobb'e J. Thompson), a tiny terror tyke whose mouth is as foul as anything heard on pay cable. The pairings are horribly matched and everyone pretty much hates each other, but you can pretty much guess that they’ll all be best friends by the film’s end. Of course it’s the journey that is so much fun.

Many of the film’s big laughs come from Augie’s participation in LAIRE (Live Action Interactive Roleplaying Explorers) which is a role playing scenario in which a bunch of dorks dress up in medieval costumes and pretend to be knights in shining armor or what have you. The guy who plays Katherine Heigl’s doctor in Knocked Up is the King and he’s simply awesome in the role, as he takes his being the king way too seriously. It is Augie’s goal to take out the king in a massive annual mock battle and become the king of LAIRE. Rudd mostly rolls his eyes, in typical Paul Rudd fashion.

Meanwhile, Ronnie is making Wheeler’s life a living hell. He’s foul-mouth and always gets himself into trouble. He even locks Wheeler out of his jeep and drives with Wheeler chasing on foot. Of course, Wheeler isn’t exactly a saint. During a campout, he takes too much Ambien and stumbles out of his tent completely naked after a tryst with a Sturdy Wings co-ed. Oh and he brings Ronnie to a party and leaves the kid to fend for himself while he hooks up with an elementary school teacher.

By the end of the film both Danny and Wheeler will learn lessons about themselves and their little friends. And by the end they will be dressed as members of KISS. David Wain has made a film, while not on par with “American Summer”, that is funny and feels surprisingly fresh. You’d be doing yourself a favor to partaketh in “Role Models,” doth won’t be disappointed. GRADE: B+