Love at First Bite: “Twilight” Doesn't Suck (Too Much) 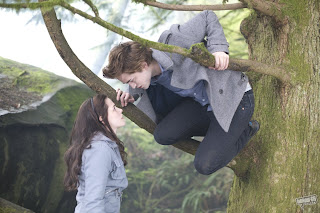 Okay, I’m going to admit right off the bat that I’m not exactly the target audience for this teen vampire romance. In fact I’m not really sure what I was doing at the theater on opening night amongst all those 12 year old girls. You’d think I was at a Jonas Brothers concert. They cheer and applauded. And if you’re a fan of these vampire novels then you’re probably going to enjoy the movie as well. I’ve never read the novels (and don’t plan to) and I actually never even heard of “Twilight” until it started getting a lot of attention because of the film adaptation. So in all honesty, this movie is one gigantic ball of cheese, extra gooey. But I’d be lying if I said I wasn’t actually entertained throughout.

I can’t really decide if actually going to see this film on opening night was a good experience or a bad one. I mean, most films with built-in audiences are going to flock on opening day, but perhaps this was a mistake. They entire audience cheered with glee when the title of the film appeared. I said the TITLE. The double syllable word twilight was enough to send a wave squeals throughout the theater. And don’t even get me started when Edward (Robert Pattinson) appeared on screen. I thought every girl was going to fall down dead. Ok so besides all the screaming tweens, is this movie any good? Yes and no.

I don’t really know if I would say this is a good film. I’m sure I would call it faithful to the source material based on the audience’s reactions. Basically what the big deal is that Bella (Kristen Stewart) is a new girl to Forks, Washington. She’s saying with her father (Billy Burke). She meets a boy who she knew from when she was younger named Jacob. At school, she meets a few friends, but mostly feels like an outcast. Then she meets strange by dreamy Edward (cue the salivating tweens). Something is slightly off about Edward and his “brothers” and “sisters.” They are odd and rather pale, but I guess that’s sort of normal for the northwest. It turns out Edward is (spoiler!!!) a vampire, although him and his family don’t prey on humans to feast. They’re “vegetarians” if you will, and only feed on the blood of animals. Actually learning about Edward and his family was more fascinating than I thought it would be and Pattinson actually is a rather charismatic actor and has good chemistry with the rather bland Stewart (anyone else thing she looks like a boy going through puberty?) And let’s be frank people, from what I’ve heard the movie is all about this vampire/human romance, which I believe is sort of sold well in the film. Having been directed (and written) by women (Catherine Hardwicke and Melissa Rosenberg respectively) the romance cheese is turned up to an eleven.

The film was entertaining for the most part, although it sometimes bordered on camp. Some of the supporting players (including Bella’s mortal friends) overacted slightly as if they were competing to be the funniest one on the gag reel. The “bad guys” who are also vampires but still prey on innocent humans. These characters who include James (The OC’s Cam Gigandet), Laurent (Edi Gathegi), and Victoria (Rachelle Lefevre) are not well rounded at all. We don’t learn anything about them and they seem just stuck in the movie simply to have some sort of conflict. As if a romance between a human and vampire wouldn’t be enough. It would have been more interesting if Edward was “sort of” a vegetarian and the story focused on his urge not to drink Bella’s blood. But I’m not Stephenie Meyer am I. Edward’s family life was some of the more interesting stuff going on here, although their family tradition of playing baseball during thunderstorms was rather silly if you ask me.

Let’s get this straight; all you adolescent girls out there will think this is your favorite movie of all time. However there might be something here for others if you’re willing to check it out. Just be ready to beat off little girls for the best seat in the theater. GRADE: B

Thanks for finally talking about > "Love at First Bite: "Twilight" Doesn't Suck (Too Much)" < Liked it!

Feel free to surf to my weblog: iherb coupon

If some one wants expert view on the topic of running a blog afterward i advise him/her to go to see this website, Keep up the fastidious
job.